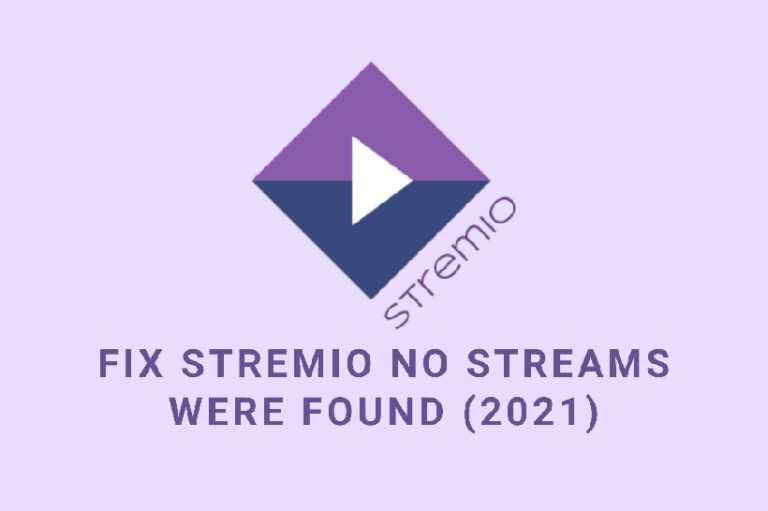 As I have mentioned in my earlier articles about Stremio and its various errors, Stremio is a great app. But like all the other apps, it is bound to not work sometimes. This time we are going to discuss the issue of no streams and how to fix Stremio no streams were found in the year 2022.

This could be happening due to some reasons that we would be discussing in a few moments, but before that let us talk about what Stremio is and how it works. If necessary I would drop a few links as well so keep reading.

What is Stremio and how does it work?

This service, which was first launched in 2015 is a media streaming service very similar to Kodi. It is available for multiple devices and is super easy to use. Since the service is from 2015, it is very modern and fast so you generally should not find any issues.

The service is also free of cost, therefore much better than any of those premium services like Netflix or Amazon Prime in some aspects. You would not need to pay for each selective content as you would get all of it in one place. Besides, it’s completely legal! So no more worrying about using VPN or feeling bad about using illegal apps.

But hold on, how does Stremio work then? Well, it’s very simple. If you know what Kodi does then you do know what Stremio does too. It makes use of multiple add-ons which are specific for each channel or service. You can even use the Netflix add-on to watch Netflix!

Of course, you would need to have a premium subscription on Netflix for this but the app is free because you’re paying Netflix, not Stremio. Besides, there are loads of free add-ons to use as well!

There are some reasons due to which this might be happening. The reasons and solutions are discussed below.

If you are facing the issue of ‘no streams were found’ then it is possible that the app you are using is outdated and cannot synchronize with the server. This would result in Stremio failing to fetch the channels or add on respective services for you and show this error. You can update Stremio through Play Store by clicking on this link.

This is a very case, but it still is possible nevertheless. Most of the high-quality services work on servers so that when one goes on maintenance the backup servers manage everything. But in cases, this fails to work then you would face a situation like this where your app would fail to load everything, not just the add-ons.

The most common cause for this issue is that you might have removed every add-on, or perhaps you have not installed them yet, to begin with. I mean it is pretty clear. If you do not have an add-on, Stremio has no choice but to display no streams were found. You can fix the issue but adding the add ons to your taste and requirement.

Moving forward, another reason for Stremio no links were found issue could be your internet connection.

If your internet connection is working, but it isn’t stable, then it could also be an issue.

You can check your internet connection speed online on fast.com or other similar services.

Also, turn off your WiFi router and turn it on after a few minutes. Once, you are sure your internet is working fine, open Stremio and the no stream issue should have been fixed now.

Moreover, you can also try using it via your mobile data.

Another reason for Stremio no streams were found could be your VPN.

A VPN disguises your location and hides your identity, so if you have turned on your VPN, it could cause issues while loading streams on Stremio.

Many users have also confirmed that disabling their VPN fixed the issue, and they were able to stream movies and TV series on Stremio.

So, why don’t you give it a try, disable your VPN and then try using the Stremio?

Moving forward, if you have an Antivirus installed on your device, it could also stop or hinder the working of the Stremio.

Disabling your Antivirus could solve the problem of no streams were found on Stremio.

So, disable the Antivirus and then try using the Stremio.

Lastly, if still, your Stremio isn’t working, uninstall it and reinstall it again.

Sometimes, apps and software are required to installed again because there can some underlying bugs and issues causing the app not to work properly.

So, simply uninstall the Stremio and download it again, install the necessary plugins, and follow the things mentioned above, and probably it should work now.

If it is still not working, may be it’s time to look for an alternative.

This article covers ways to fix Stremio no streams were found issue. I hope the article proved useful for you. If you need more articles on a similar app like Stremio, try Peacock TV.

is Stremio Safe and legal to use : Explained