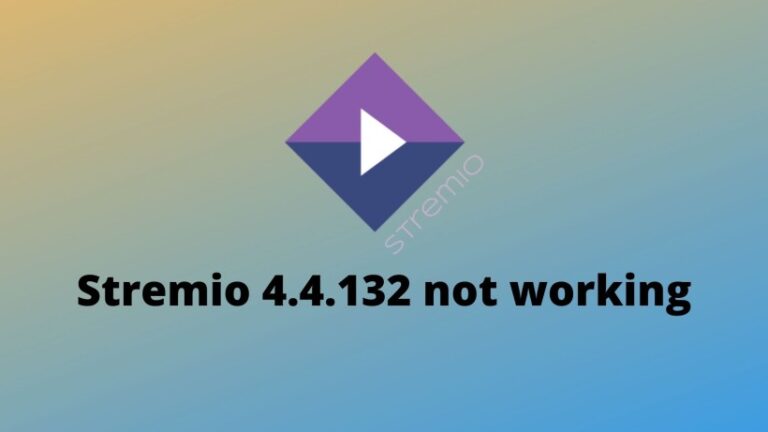 Stremio, as the name says, is a place where you can stream almost everything for free. In other words, this is a sort of media centre to watch movies, web shows, series, programs, and more. Unlike most of the other players, Stremio brings in a good user interface. Now, the UI plays an important role in enhancing the viewing experience of the users. Along with that, Stremio supports the media from a wide range of sources and streaming platforms.

Well, one of the most important thing in any such software is the support for constant updates and bug fixes. Luckily, Stremio is no different. But, sometimes, these updates go wrong. I mean that the basic idea of updates is to fix the existing issues and bring in some new useful features. It may not work the same way. This is what happened with Stremio 4.4.132. If you are also facing a similar issue, then here is how to fix it.

First of all, it is not something new that has happened with this update. In the past, we have seen a similar thing happening with software updates for apps, games, smartphones, and other devices. So, in Stremio 4.4.132 there is a noticeable bug related to the HEVC codec. Whenever you try to play any media content supported by the HEVC codec, the screen suddenly turns blue and the app crashes altogether.

Now, it does not apply to all users. Rather such bugs and issues are limited to only some users depending on the hardware and software combination. Before going to the actual method, you can try enabling this small thing in the device settings. Navigate to Settings -> Player -> Hardware accelerated decode. If that didn’t work, then here is another method to try out.

So, the basic idea of fixing this issue is to downgrade the version. Now, some of you might think that how is downgrading a viable solution. Even if it is, then which version is the best to adopt. So, among all the earlier versions, you can download Stremio 4.4.120.

Step 2: After you have downloaded it, open the downloads section and install it.

Step 3: But before that, you need to uninstall the existing version and then install the downloaded version.

Step 4: Run the exe file, click on Next multiple times to complete the setup.

Step 5: Open the app and start using it.

To conclude, downgrade your current version of Stremio and start using it as ever before. On the other hand, you can also have a look at the new update which fixes this issue. You can check this on their official website or follow a dedicated subreddit page by clicking here. On a final note, share this with your Stremio friends and network who may be facing a similar issue.