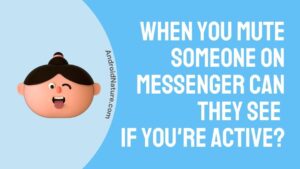 Meta Platforms created Facebook Messenger, an instant messaging app and platform. In 2008, it was first released as Facebook Chat. Anyone who uses Facebook on a regular basis will like the Messaging app. You may communicate with your pals quickly, wherever you are, and at any time with this app.

If you don’t want to be distracted by beeps or notifications from people who are sending texts on Messenger, the mute chat option comes in handy. There are a variety of options for muting. For 30 minutes, 1 hour, 8 hours, 24 hours, or permanently, the individual can silence you. So how can you tell if you’ve been silenced?

Are you unsure how to tell whether someone on Facebook Messenger has muted you? This could be the most difficult situation you’re in if someone isn’t responding to your messenger messages or if you’ve lately had a disagreement with them. Knowing whether or not you’ve been silenced is the only way to confirm your suspicions.

If someone muted you on Messenger can you still see when they are active?

Quick Answer: Yes, even if someone muted you on Messenger, you will see whenever they are active. If you cannot see the Active status, this could mean the user has turned off their Active status visibility or blocked you.

If you are not sure if someone has really blocked you on FB or Messenger, make sure you read our detailed post on – How To Know If Someone Blocked You On Messenger Without Messaging Them?

Nothing really changes when you mute someone on Messenger. The only difference is that you will not be notified when the person sends you a message. Instead, the texts will appear in your inbox quietly, without any annoying beeps.

It means that even if someone has muted you on Messenger, you can still see if they are online and find out when they last used the app.

If someone hasn’t been responding to your messages on Facebook Messenger, this fast advice on how to find out if they’ve been muted should come in handy. Remember, there are a few strategies and methods for reading the message without having to open it. As a result, you should not jump to the conclusion that the person has muted you.

When you mute someone on Facebook, you will not receive notifications of new messages that have been sent. You might be wondering if someone will notice if you silence them on Facebook Messenger. No, they aren’t going to do it.

Part of the goal of the Facebook function is to accomplish this. There is no way to tell who has muted you on Facebook without an alert or a hack.

Short Answer: If you mute someone on Messenger, they can still see if you are Active. If you want to hide your status for a specific user, you will have to restrict or block them.

When you mute a chat, you will no longer receive notifications for that particular messaging conversation. This isn’t to say that you won’t get messages in that chat. Messages will be sent to you, but you will not be alerted.

You won’t be notified about future messages if you Mute a conversation on Facebook Messenger. The thread’s messages will display in your Inbox quietly, without distracting you. You can check the messages yourself later when you have more time.

So the answer is yes, you will receive messages even if you have muted the Facebook Messenger chat.

If you believe you have been muted on Facebook, your message is unlikely to be ‘Seen.’ This indicates that they did not read the message.

It will say ‘Message sent’ if you have sent a message but it has not been received. This indicates that the receiver has not been online recently. If it says ‘Message delivered,’ it suggests the recipient has been online but has yet to see the message.

When most people log on to Facebook, they check their messages. If you are aware that your communications have been sent but not read, you have two options:

Here’s a strategy that some people claim works on Facebook, but we don’t think it does anymore. The ‘glitch method‘ on Facebook is what it’s called.

We tried this strategy, and while it may have worked for some people in the past, it no longer appears to operate on Facebook.

How to mute someone on Messenger

Muting a chat thread allows users to put conversations on hold without removing them from their inbox or marking them as read. To mute a Messenger discussion, hold down the long-press button on a thread and then hit ‘Mute.’

Message notifications call notifications, or both can be muted. You can also set a time limit for the muting. The muted messages will be marked with a bell icon.

Here you can learn steps to mute a chat on messenger.

What happens when you mute someone on Messenger

Quick Answer: When you mute someone on Messenger, you won’t receive a notification of their messages. And they won’t know if they have been muted by you. Nothing else changes!

If you mute someone on Messenger can they still message you

Yes, even if you mute someone on Messenger they will still be able to message you. But, you won’t receive any notification for that particular chat.

Finally, muting a conversation on Facebook Messenger has little impact as compared to ignoring or blocking a chat. It simply conveys the messages in a subtle manner.

So, if you want to avoid someone while still keeping an eye on them, you can Mute them, which will also keep you from being disturbed.

I hope you found what you were looking for and that we can resolve your issue. For the time being, this is all we have for you.

[Solved] Why does Messenger show active?

[FIXED] Why did I receive a Messenger verification code

[8 Ways to fix] Why I can’t open Messenger