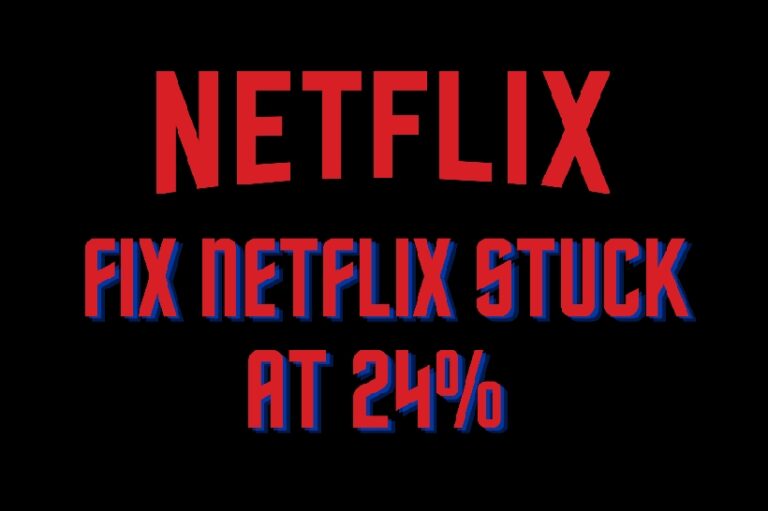 Who does not love Netflix? From movies to TV shows and anime, Netflix hosts them all. I have yet to find a person who dislikes Netflix. But even with all of the cool features and great things in place, sometimes an app can have troubles. After all, it is a piece of code and codes can fail to work at times, due to glitches or certain restrictions. This article discusses what could probably cause Netflix to stuck at 24% error.

We will also look at how we can solve these issues if possible. Make sure to read to the end of the article as all the solutions might not work for you. This is because we have aggregated the most possible solutions to this without an official word from Netflix about it. So let us start without further ado.

Honestly, I do not think this needs an explanation but if some users still have not heard of it, there this would help.

Netflix was founded on 29 August 1997 in the Scotts Valley of California. The app was one of its kind back then and provided media streaming services. Even with so much competition and new concepts, creative ideas by other apps Netflix has maintained its reputation quite well. If anything, its reputation has even grown more.

After all who has not heard of Netflix and Chill? Which, by the way, has a lot of different contexts for different people so let’s quickly proceed before you ask for one. Netflix includes infamous shows like Ragnarok, Lucifer, Money Heist, and so on. You would not be disappointed with it.

With all of these things and super smooth UI, Netflix must be quite expensive right? Well sort of, but in the past. A while ago Netflix was the kind of subscription that a common Indian man would have to think about when buying but now Netflix has adapted. You can get Netflix subscriptions for as check as ₹199!

Now that is exciting news I know. To know more about the plans and pricing of Netflix, check out their page by clicking here.

How to fix Netflix stuck at 24% loading screen issue

So let me explain the issue in brief real quick before we proceed. Multiple users report that their Netflix service stops loading at 24%, and some even complain that the same is happening at 99%.

It does manage to run sometimes for some users but most of the time it is struck like that. If you happen to be facing this too, then how to solve them and reasons are listed below:

If you are mad because I list this as the first reason in almost every article then let me explain. Most online services that successfully open on your device but do not work are probably due to this reason. Especially servers like Netflix, use high-tech servers to make sure the data of users is safe and the connection is fast.

So it is natural that if you are running an outdated version of Netflix then you would face this error. But wait, there is more to it. This time it seems to be the main cause for the issue.

Since maximum reports of Netflix having this issue are from Smart TV it is easily understandable that the apps that come pre-installed on your TV might be outdated.

If you are wondering ‘what if the TV was from a year ago and the Netflix started showing errors now’? This can happen too. Every company provides some kind of backward compatibility so that users who are running the older versions can keep running them for some time.

For example, if the latest version is 5.0 you might be able to run 3.8 but when it upgrades to 5.2 you would have to use 4.0. If you get the hang of it then go to the App Store on your TV and upgrade Netflix.

Another very simple solution to this. While it is not exactly clear how rebooting helps but multiple users claimed it helped it solving the issue, sometimes even permanently.

But this is not the standard reboot using the power button or the switch. You need to head to the settings and find the reboot option in your TV and it would vary with each model.

When you find it, press reboot and the television will be rebooted with none of your data changed. Hopefully, it will also solve the issue of Netflix stuck at 24%.

Netflix is known to be great when it comes to streaming on slow internet connections. You might get a drop in video quality but it still streams nonetheless. But users have reported this might be because of slow internet.

Sometimes sessions can time out, that is, a server would only entertain a request for a certain time. If your internet connection is too slow the loading would take too much time and as a result, it will get stuck at 24%.

Among various other ‘solutions’ I found this one. As weird as it might seem it is not surprising. Netflix is not supported on some devices, so why would we expect it to support all the smart Televisions? Even though it does try to be as much compatible as it can be, glitches can still happen.

If you have an old smart TV (typically speaking anything that is from the starting era of Smart TVs) or is not a highly recognized brand then you should consider trying Netflix on other TV.

Always remember to check Reddit and other such groups before you buy expensive products that could not be changed easily.

There are multiple users with the same television that would love to answer if the certain app works on their TV or not, which can help you in making up your mind.

Sometimes the problem may not be just from your side. It might be that the servers of the Netflix are down or having issues.

So, it always a good idea to know whether the issues lies on your end or on the server end.

That being said, you can check the server status of Netflix online for free.

We would recommend, visiting the downdetector page for Netflix. Here check the user comments and number of reports.

If you find there are too many reports, it clearly indicates servers of Netflix are having issues.

In this case, you would like to wait till the servers gets completely fixed.

The following article discussed How to fix Netflix stuck at 24% loading screen. I hope it proved to be useful for you. If you would like to read about free alternatives to Netflix, try Stremio or Peacock TV.