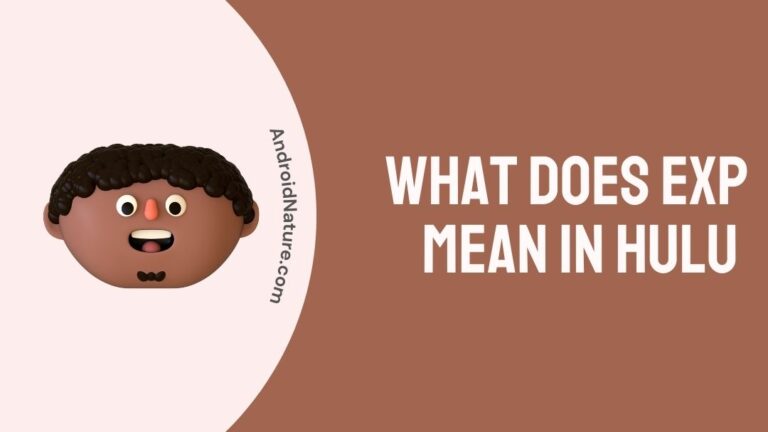 EXP on Hulu is a clear indication that that show or the movie licensing will end and it will be removed.

Confused? Continue reading to know more about it.

Hulu is a streaming platform to stream movies and Tv shows, all the popular shows along with the latest ones are all available on Hulu. Hulu was launched on October 29, 2007. Hulu mainly offers films and Tv shows from networks like ABS, FX networks along with Hulu’s original programs. Hulu is owned by The Walt Disney Company.

Hulu as of now is only available in the USA and its international territories and also in Japan. Hulu has about 43.8 million subscribers as of now. It has gained popularity over the years and gained subscribers through the passage of time. Hulu has put out in-demand shows with all the seasons making it a platform that is binge-worthy.

Hulu even offers a free trial whereby you just need to sign up and create an account to get on with watching programs for free for the whole month and you can cancel the subscription any time. Hulu comes with different subscription plans mainly the ad-supported ones and non-add-supported ones whereby on the latter you can binge-watch anything without the interruption of commercials.

You might be watching a movie or Tv show on Hulu and it displays EXP, you’re wondering what that means? Then read this article to learn more on: What does EXP mean in Hulu

What does EXP mean in Hulu?

You might be coming across EXP on Hulu and wondering what EXP mean in Hulu, well it is a clear indication that that show or the movie licensing will end and it will be removed.

Unlike other streaming platforms, Hulu takes time to notify the consumers about which show is going to expire and be removed from the Hulu library. The EXP on Hulu comes with a certain date and time given near the EXP whereby the viewer can have a clear idea of when their favorite show or the show that they have been wanting to watch on Hulu will be removed.

Depending on the device that you are using the expiring badge will be given on the top of the video thumbnail. Also, when the program is about to be removed, the Hulu team tries their best to notify you and they even go through all the way to move the expiring content to the My stuff section.

What does exp 12 days mean on Hulu?

If right next to the Exp it is shown as 12 days or the video thumbnail of a certain show or movie has a badge with exp 12 days, it indicates that that certain program will expire in 12 days.

Few of the program’s licensing expires and certain shows licenses might be expiring within 12 days from the expiration of the license Hulu is not allowed to put the content out for streaming for its audience so the 12 days clearly means that show will be removed from the streaming platform soon.

What does exp 10 days mean on Hulu?

If it shows exp 10 days then it means that content is scheduled to be removed after 10 days and to notify the audience to watch it or complete the program before it has been removed.

Giving them a certain time limit like exp 10 days gives the audience enough time to watch the Tv show or movies and then come to terms that the content will be removed, in a dramatic way they might even be able to say goodbye to their beloved show or movie within 10 days.

What time do Hulu shows expire?

When the show expires or gets removed from Hulu, it usually gets expired at midnight. If the show badge indicates that it will expire within 5 days then it will expire on 23:59 of the 5th day.

From above the show will be available till that period of time and then it will be removed. There will be several different times and days of expiry for different shows and it will all depend on the date and time on which the license will expire. The exp content gets removed during midnight and the exp days will keep on decreasing with the passage of days from when the exp was given.

Hulu shows give the users enough time to finish watching the movie or tv show before it gets permanently removed. Sometimes it’s hard to get the licensing of certain movies and tv shows so even after it gets removed, it probably won’t be back on the streaming platform anytime soon, and by altering the viewers of the removal they provide a better service.

Do expire Hulu shows come back?

Expired shows coming back solely depends on Hulu whether they want to bring back that program or not along with that it depends on whether the certified distributor company wants to give Hulu licensing rights back or not.

When the licensing rights expire the show has to be removed by Hulu from their streaming platform. Often times movies and shows are known to be removed due to the expiration of license rights. If the distributor company decides to give back the license rights then the Hulu shows can come back.

You can upgrade to the premium plan whereby you will be able to stream without getting interrupted by ads.

Q2.  Can Hulu accounts get hacked?

Yes, Hulu accounts can get hacked and the accounts that have been hacked before are prone to be hacked again.

Hulu has shown itself to a great streaming platform with a wide range of content libraries to choose from consisting of all-time favorite tv programs. Hulu keeps the users notified regarding the expiration of certain content.

We hope that this article helped you gain more insight into what EXP mean in Hulu. Do check out our other articles.

Why am I not Eligible for Hulu Free Trial [Fixed]

How to Fix Verizon Disney bundle Hulu not working

Why is HBO Max different on Hulu?