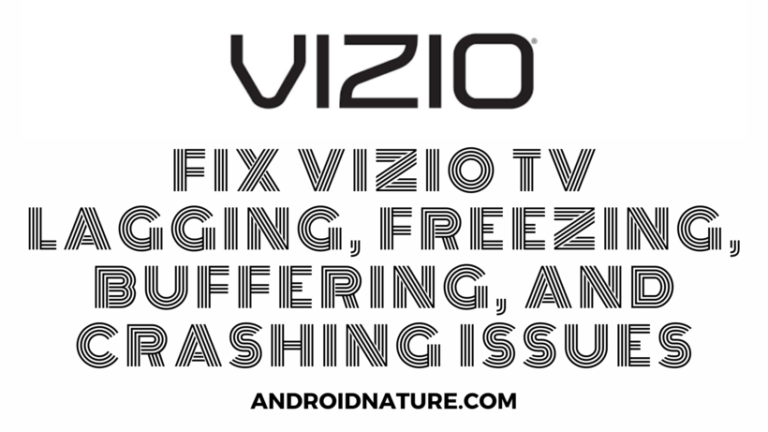 Vizio TV has an established name in the sector of Television. There are many ranges of great Televisions Vizio has released, but in the end, it is quite normal for them to lag, freeze or buffer at times. This article discusses Vizio TV lagging, freezing, buffering, and crashing issues.

You might have found your Television having these issues lately and it is kind of frustrating. Well, we have got a small and simple but effective solution that should help you fix them right away! So keep on reading!

This is always the first thing on my list and the same goes for this article too. Checking your internet connection is a good step at determining the fault is not in the network rather the Television.

If your Vizio TV is lagging then there is a very good possibility it has been running an old version of the Operating System. Even if you are sure of the fact that the lags and freezes might not be due to the Updates, you still should consider updating it.

Updating has numerous benefits, even if you see them as tiny ones. General stability and bug fixes, security issues and so many other new features are added with updates. Take Vizio TV itself as an example.

If you updated some of its smart TVs from 2017 to 2018, which firstly only came with the automatic updates system, you could get the option to update them manually too! Now that’s the kind of update everyone would love to have.

To update your Television go to settings and check for updates. Your smart TV would automatically update if it is only automatic update enabled firmware.

Vizio Smart TV can be rebooted and this would hopefully remove any temporary glitch or lag that has been ‘formed’ in the coded lines of the Television. Rebooting televisions is like refreshing them.

You could be sure that the removes any persistent apps from the background, clearing up space and providing a smoother environment for other applications to work on your Smart Television.

This is very similar to rebooting. However, television retains a certain amount of data to turn back on quickly and provide you with an optimal user experience.

Removing the power cord from the power source for a few minutes makes sure nothing remains in the television, even if in the form of a cache.  Some even suggest holding down the power button on the remote for half a minute for the complete erasing of any persisting glitch.

Since it is a Smart TV, it holds a plethora of Channels, apps, web streaming services, history, downloaded files, preferably movies, Recordings, and cache from different applications.

Having so much data means your device might be very close to filling up or might already have filled up. A Smart TV would generally show notification for critically full storage but this could fail to happen if it is way too overloaded, leaving your Vizio TV glitching, lagging, and crashing multiple times.

Clean storage space on your Vizio Smart TV by deleting unnecessary recordings and removing channels that you do not use actively. This would also prevent any unexpected extra Billings to your card.

Now comes the part where we focus on certain apps rather than the whole TV. This is done when you suspect one app to be doing it. Try to notice which app is open when the TV starts to freeze, or what you do when it happens.

You should try to write down the list of apps that start right when you switch on the TV, and whether it glitches then. Try force shutting off some apps and see any noticeable difference and keep researching.

You would sooner or later stumble across an app that is not much compatible with your device for some reason and causing issues. For the most part, you can stop worrying about apps like Netflix, etc because they are very Optimized and have the least chances of glitching your device.

If you have detected the faulty app or even if you were not able to, you can uninstall a bunch of apps and install them one by one and note the performance. This would be a very good idea if you do not mind downloading and logging in to your apps again.

Doing this ensures your television gets rid of the faulty app, along with getting a new version of it that might just start to work smoothly with your Vizio Smart TV!

Do not go after the fancy title, rather understand what it is trying to say. You should always have a little bit of research before you decide to buy a TV or troubleshoot anything on your own.

Several users on Reddit with the same television set as yours could help you out easily. Besides, customer support always has loads of issues they have solved for others, sometimes even technical issues that need to be fixed by a professional. So do not hesitate to contact them.

If you have tried everything then I am afraid this is the only way to go. You can factory reset a television through its Settings but always remember to back up your data.

Your app settings and data could be managed by logging in but movies and other downloaded files need to be backed up. You can also choose a way to simply erase the unnecessary part so that it would not mess with your data at all!

The above article discussed ways in which you could fix Vizio TV lagging, freezing, buffering, and crashing. I hope it provides useful to you!