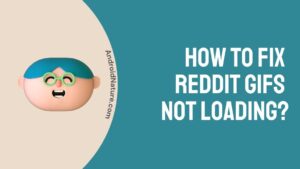 Reddit users are familiar with the issue of the Reddit app failing to load on Android or iOS. This issue arises from time to time. For unknown reasons, the Reddit app becomes stuck loading videos, comments, posts, GIFs, NSFW, and other content.

If you are one of those users asking “why is my Reddit app not loading or takes forever to load things and how to fix”, find an answer here.

Before we offer any remedies to the problem of GIFs not working on phones, we’d like to point out a few possible causes:

The problem could be caused by a variety of factors, however we can only provide you with these based on current sources.

At this time, Reddit has not provided an official fix for the Reddit app’s GIFs issue. However, Reddit users have provided some solutions. The following are all of the solutions that can be used to restore audio for some people. Give them a shot.

Resource-intensive apps, such as Reddit mobile, struggle on older devices. The Reddit app’s processing capacity is insufficient to load material such as videos due to the obsolete hardware. The Reddit app then displays the loading indicator indefinitely, and you are unable to view or watch the post or video you desire.

Go to Settings after tapping on Apps.
Under Settings, look for Application Manager and click on it.
Swipe down to the Clear Cache button on the Reddit App. On it, tap. This clears the cache and makes room for speedier loading.

Reddit mobile home/videos/pictures not loading issues can easily be caused by incorrect settings. A Reddit member urged everyone to remove permissions from the Reddit app. The procedures to repair the Reddit app not loading videos or gifs on Android phones are as follows. On iOS, the troubleshooting may be different, but it is similar.

Find the Reddit app and grant it permission to read and write external storage under security and privacy.

Try again, and the videos, GIFs, posts, and other content should now appear on the Reddit app.

The Reddit app takes forever to load movies, GIFs, top pages, NSFW, and other content if your network is too slow. Users have reported that updating the DNS settings on their router fixes the Reddit app loading indefinitely.

Check what DNS service you’re currently using and try Google DNS, Cloudflare, or OpenDNS. For example, here’s how to use DNS settings to solve the Reddit app for Android that won’t load:

Go to Settings > WiFi > Tap on Modify Network after pressing and holding your WiFi network.

Discover IP Settings by selecting Show advanced options > find IP Settings. This should be set to DHCP by default; tap it and choose Static.

Now find the DNS settings option by scrolling down. Then save and try again with the DNS address.

If your ISP disables a resource used by the Reddit app, the app will not load content. First, see if your router’s DNS is broken, and if so, change the DNS settings according to the instructions above.

While it is easy for videos to begin playing automatically when you browse near them, playing each video requires a significant amount of bandwidth. As a result, the Reddit app may hang or become stuck while loading videos/GIFs, or the loading may become extremely slow.

You can manually turn off the autoplay option. Open the Reddit app and go to the top left corner of the screen to the Profile Icon. Locate the Autoplay option in the Settings Menu. Set the Autoplay to Never from the dropdown menu. Then reopen the app and give it another shot.

Due to a poor internet connection, GIFs are not loading on the phone. Here’s how you can do it:

Apple Inc. provides a country-specific function called #images, and an improper Region & Language configuration could result in GIFs not operating on the iPhone. Change the region to the current country by taking the following steps:

Go to General > Settings. To change the region and language, select Region & Language.

If GIFs aren’t loading on the Reddit app, restart it and see if they function on your phone. Here’s how to do it:

GIFs not working on phone can be fixed by updating your phone to the current version. Here’s how to do it:

Go to General > Software Update in Settings. If updates are available, select Download and Install to complete the upgrade.

You can factory reset your device if none of the other options work. Before you do that, make a backup of your device so you don’t lose any information.
To do so, follow these steps:
Select General > Reset > Erase All Content and Settings from the Settings menu. The device will then be erased if you confirm this step.

If all else fails, start a new discussion on Reddit’s help forum and ask the mods what to do next. Tell them about everything you’ve tried thus far (which devices function and which browsers don’t). It might be great if you could take a screenshot of the conversation not loading.

Also, tell them about your computer (for example, “I’m running Chrome 43.9 on Windows 10”). They may also request that you supply comprehensive information about the error message that appears in your browser or app; they should explain how to locate this information, as it will vary by system. Best of luck!

You will be able to solve the problem of GIFs not working on Reddit by looking at the solutions provided in this post. Problem solving may be accompanied by the risk of losing data when using popular procedures. To mitigate this risk, you can use Joyoshare UltFix to resolve the issue.

After all, professional software comes with a number of unique features. Only a small number of fixes are now known, and we can only get this much information about how to solve this problem for the time being.

I hope these will be useful to you. Yes, please feel free to share what you think works in the comments section below.