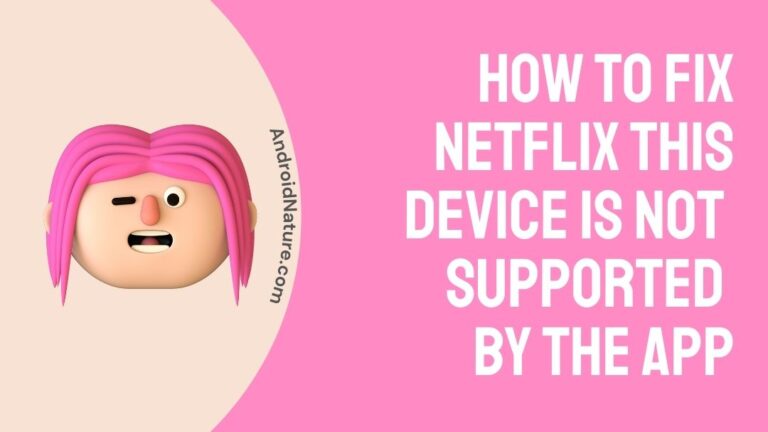 Netflix coupled with giving out great subscription plans even allows its users to watch movies without an internet connection by downloading them and this feature is available on all smartphones, laptops, and any other devices used.

The most popular Netflix subscriptions are Netflix standard and premium whereby the former will allow the users to stream in HD along with being able to stream on two devices while the latter lets the users enjoy the movies in Ultra HD with streaming available on four devices.

In rare moments, issues do arise with Netflix hence leading the app-to face trouble streaming on certain devices. It makes the user feel frustrated as sometimes they are unable to figure out the issue and how to solve it.

Why is my device not supported by Netflix?

The device is not supported by Netflix is constantly being displayed on your screen and you’re left confused about what could be the cause of it. The cause of it is due to an older version of Netflix installed on your device or due to build up cache.

It can be quite frustrating when you constantly try to open the app but it keeps on displaying that on your device Netflix is not supported. At times when new updates of the app are launched, it is sometimes not compatible with the old devices as it used to be before and it can cause disappointment for users when they are unable to open the app.

When a user is streaming through android Tv, it can show an error that the Netflix app is not supported I the device as you might have downloaded the app from another source rather than from the Google play store or it can be even due to the fact that it’s not available on the google play store then they might have to go ahead and stream it on another device.

Netflix is not supported on your device could even indicate that the device that you are using is not meeting certain requirements set by the Google play store, in order to download the app and use Netflix you will need to meet the requirements along with that your device need to be certified.

Devices having older versions of Android or even your play store will not permit you to download the Netflix app and even stream on it hence you will face the issue of your device not being supported, for that you can install the app directly from Netflix.

How to fix Netflix this device is not supported by the app?

Follow the methods below to fix Netflix is not supported on my device:

Often times the issue of Netflix not being supported on the device will be fixed right when you update the app to a newer updated version.

If your device is not certified then you can download the app APK by following the steps below:

When your device is not certified by the google play store then you won’t be having to access the app. For issues like this Netflix give the option of downloading an app from their site.

Answer: On uncertified models, the install ion process is not available and the app is not supported as the device is not certified. But you can download the APK or download Netflix from the Netflix website for streaming.

Q2. Does Netflix offer a free trial for one month?

Answer: Before Netflix used to offer free trials but not anymore. Even if Netflix doesn’t offer a free trial, a user is allowed to cancel the subscription anytime.

Netflix contains a wide range of movies ad the latest Tv shows which keeps us entertained and they have been doing so for quite a decade. There can be issues with the app not being compatible with your devices but Netflix always comes up with new solutions to help its consumers with the issues they face.

We hope that this article helped you fix the issue of Netflix is not being supported on your device. If any new methods come up to fix the issues we will keep you updated.

Do check out our other article on the page.

How to pay Netflix using Gcash without MasterCard