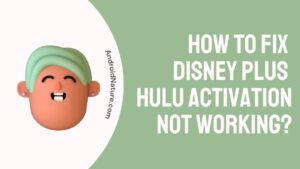 Hulu is a great platform for catering to all  your entertainment needs.

It bring in a good selection of popular titles and Live TV all at one place but do you know what’s better than Hulu? Hulu and Disney+ both in one place!

With both services integrated seamlessly into each other, your entertainment option simply gets elevated.

To add to this having this bundle activated also lets users pay less for the services than if availed separately.

But, sometimes users can face problems with activating their add-on Disney+ subscription from their Hulu account.

This problem has been reported by many people and has been known to be quite common.

If you are facing this same problem as a user then have a read of this article to know why and how to fix this.

Why is Hulu not working with Disney bundle?

There can be many reasons why you can’t activate hulu with disney bundle such as you are using the same email that you previously used on your Disney account, you might not have activated your account, you are trying to use the offer outside US, previously loaded files or cache is causing the issue, etc.

Despite being synced on to one platform, both Disney+ and Hulu are inherently different service. Their integration is great but can sometimes face hurdles.

For users to be able too Disney+ and Hulu properly, a good internet connection is a necessity.

Having faulty or poor internet connectivity can also cause problems with the platform at times.

Users also need to remember that the Disney+ and Hulu bundle is for people who already don’t have a Disney+ bundle linked to their current account.

If you already have a Disney+ connection on your email then users will need to have a separate new ID.

Users also need to download a separate Disney+ application on the device they are trying to use this bundle. As the app requires to integrate in to its proprietary app to function properly.

Others might face problems with their passwords as well, so changing passwords can also be key.

Depending on the type of problem, users may have to use different steps to solve their problem.

Users who can diagnose the problem themselves can use the relevant steps to resolve their issue. However, for those unable to zero down on one reason can try all the given steps.

We recommend users to follow the steps properly to avoid further complication of problem.

How to Fix Disney plus Hulu activation not working?

If you have reached this part of the article you must be looking on ways to resolve the issue. Since we now know some of the major causes of the problem we can remedy them one by one.

As the first action of remedy, users need to have stable and fast internet connectivity to be able to access content smoothly and properly on their device.

To check if users have a proper internet connection, follow the given steps:

For users to enjoy Hulu and Disney+ on their devices, users need to make sure that they have the minimum speed required for streaming.

Having speeds below the recommended level will only make users have slow and unenjoyable experience with their Hulu and Disney services. We therefore recommend having a decent speed and to contact your ISP to upgrade your connectivity speeds.

2.  Hulu Disney+ bundle not available in your country

Hulu Disney+ bundle is only available to the user in US.

So, if you are trying to use the offer outside US, it won’t work or get activated for you.

As per Disney Plus, The Bundle is only available to residents of the United States and certain U.S. territories

If you are below 18 years the bundle isn’t available for you.

As per Disney Plus:

If you subscribe to the Bundle and are under 18 years of age, you will be unable to activate one or more of your Bundled Service subscriptions, and your Bundle subscription may be canceled without notice.

Users need to understand that the Hulu and Disney+ bundle is a promotional scheme that aims at integration for convenience matters. In case users already hold an existing Disney+ account linked to their email that is being used for accessing their Hulu account, we recommend making a new email account.

Users can only have one Disney+ account linked to their email and as the new bundle tries to create a new account. Using an already existing email ID with Disney+ would cause security concerns for activation.

To stop Disney+ from suspecting users of misuse, we recommend making a new email ID or at least using a different ID that is already not attached to a Disney+ account.

5. Have the two services installed separately.

Users need to understand that they need to have both the apps installed on the devices at all times. Users will probably be able to use and view contents through Hulu but Disney+ will still be required. Depending on the device that you intend to use your Hulu and Disney+ bundle, both apps should be installed on that device side by side.

To install Disney+ on your device, follow the given steps:

Once the app is installed users can now access Disney+ and head forward with the activation process on Hulu. Having the app will make sure that users do not have problems with viewing their content after activations is successfully done.

To activate your Disney+ bundle subscription using Incognito mode, follow the given steps:

Using this method, users can bypass any prior information stored on their usual browser as cookies or cache that could obstruct activation of their Disney+ account. This method is especially useful and has been approved by many facing the same problem.

7. Update Disney Plus and Hulu apps

If you are not using the latest apps of both Hulu and Disney Plus then there could be some bugs restricting your from linking Hulu with Disney Plus.

So, make sure to update both the apps on your device before activating Hulu with Disney Plus.

If you are using Disney+ and Hulu on your mobile devices then simply uninstalling and reinstalling the apps can fix the can’t login to hulu with disney bundle problem.

Uninstalling the apps will simply clear unwanted files and underlying bugs that may be causing Hulu account to not work with Disney plus.

So, try this and check if it works or not.

Lastly, if you have tried everything and still can’t sign into Hulu with Disney plus bundle, the last step that remains is to contact Disney Plus support.

How do I activate my Disney+ through Hulu?

Alternatively user can also activate their Disney+ account by heading to their Hulu Account page. To activate your Disney+ subscription bundle through Hulu, follow the given steps:

Users with an already existing Disney+ subscription on their e-mail ID are not eligible for the bundle.

Q1. What do users get on the Disney+ bundle from Hulu?

Ans: When users subscribe to the Disney+ bundle they get access to Hulu, Disney+ and ESPN+ as well. Users through this bundle can get access to all of Hulu’s movie and show library, Disney’s library consisting of movies and short form content from Pixar, Disney, Marvel, National Geographic etc. ESPN+ will contain live and on-demand sports content, news, games, highlights etc.

Q2. Can I opt for the ESPN+ add on only without Disney+?

Ans: Yes, users can opt for the ESPN+ add on separately for their Hulu without having to subscribe to Disney+.

Q3. How much does the Disney+ bundle cost?

Ans: Users will be charged $13.99 in total per month by Hulu for getting the Disney+ bundle that will consist of Hulu, Disney+ and ESPN+.

Q4. How much does Hulu cost per month without any add-on?

Entertainment power users can now rejoice with the help of the convenient Hulu Disney Bundle, as it bring a ton of entertainment option at a good value proposition.

The pack helps user get their complete entertainment dosage without having to pay individual bills for the three services separately.

The package is however, only available for first time Disney+ subscribers so make sure to have a new ID to start. We hope that the guide has helped users sort this problem with activation while subscribing to the Disney bundle with Hulu.

How to Fix Verizon Disney bundle Hulu not working

How to Fix Hulu not working with AirPlay

How to Fix Hulu videos not playing?

Hulu your login has been blocked : 4 Simple Ways to Fix