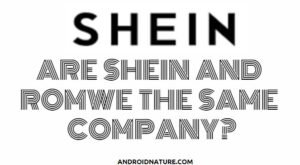 Facts are facts! That is if we talk about the place of origin of both these companies, and the purpose of their online platform, we come to a common answer. Their approach to fashion and other aspects definitely leads people to the conclusion that they are indeed the same.

Now, resources from the internet can draw a lot of speculations stating that they are the same company. But some of these claims are framed majorly by the shopping experiences that the person had on SHEIN and ROMWE.

Are SHEIN and ROMWE the same?

So are SHEIN and ROMWE the same company? Yes, they both have the common headquarters at Nanjing, Shenzhen Global E-grow E-Commerce Co. In fact, ROMWE is a subsidiary of SHEIN.

They have the same source of clothes and fashion trends. They both sell women’s clothes and they have almost the same rates. They both represent the fast fashion obsession of the west, and almost amplify the speed of trends fading in every season.

Unlike so many brands that make a gradual hype in a particular fashion line, the online shopping industry was pushed to follow a rapid stock replacement. The stocks of previous season trends are either discarded off in heaps or sold at cheaper prices.

Talking about the price variation in the online shopping platforms, SHEIN exceeds ROMWE slightly in the shipping charge. But that is not an evident difference. Moreover, SHEIN and ROMWE began their fashion legacy around the same time.

Over time, clients heard less of ROMWE and more of SHEIN. This can be pointed out to the rapid gain of popularity for SHEIN and it was able to influence the young generation profoundly, while ROMWE could not keep up the pace.

Who owns ROMWE and SHEIN?

SHEIN is owned by Nanjing Lingtian Information technology Co. and ROMWE happens to be a subsidiary of this fashion retailer. Unlike various articulations pointed out by critics regarding their suspicious nature, SHEIN and ROMWE have successfully boarded the fashion marathon.

With cheap prices and fast fashion, they have taken over Gen Z clearly through the methods of spreading trends through TikTok and other social media platforms. The founder of SHEIN and ROMWE is Chris Xu who is also the CEO of the company.

Why are SHEIN and ROMWE so cheap?

It is hard to resist cheap fashion with the risk of less life for its hype which dies soon as the season comes to an end. What matters is the rate and the temporary shine that it provides. So how can such clothes be available for the cheap rates that are presented in SHEIN?

SHEIN has always been a quiet entity and didn’t seek any sort of publication from a mainstream route. Rather they looked for the short-cuts to their popularity as much as possible. They never appeared willing to share more than what their intended purpose was; online fashion.

Various controversies sparked endlessly regarding their hidden prosperity and their take on labor exploitation. Since SHEIN neither disclosed their sources nor showed any interest in indulging in any sort of debate, it is only natural that they are marked as a suspicious organization.

Based on some replies provided by SHEIN and its subsidiaries on the topic of their sources, SHEIN provided an answer which shed light on the fact that they focus on ‘recycled polyester as much as possible. This proved to be a hollow statement as results obtained on analysis were contrasting.

Their claim on using recycled polyester was a vague statement that didn’t hold any truth. Because the search for recycled material clothes brought a much lesser amount compared to other non-recycled materials.

Again the topic of cheap clothes raised a lot of thoughts and suspicion on various social platforms, and people hoped to get to the bottom of a thrilling story. However, the hype died soon after a relevant reason came up regarding SHEIN having outsourced the manufacturing of SHEIN clothes.

They have found a cool hack to go about with labor expenses. And they even emphasized constantly how much they practice ethics in their work environment.

Q1. Why are SHEIN clothes so cheap?

SHEIN and ROMWE claim to use materials that are mostly recycled. And based on further statements from the companies side, outsourcing the manufacturing process should be a reason for them to come up as so cheap.

In this way of dealing with expenses they could possibly cut down on a lot of labor costs and hence produce clothes with the most attractive rates there is in the market.

Q2. Are SHEIN and ROMWE the same?

Yes, SHEIN and ROMWE are both parts of the same company. ROMWE is more like a subsidiary of the SHEIN online platform. Although SHEIN and ROMWE began at the same time and with the same line of products, ROMWE has a much slower pace when it comes to marketing its services.

Either way, both these online shopping platforms have the same rates on various clothes designed for women’s fashion. They even share the same headquarters in China.

They have the same source of clothes and fashion trends. They both sell women’s clothes and they have almost the same rates.

This article explains in details everything you need to know about SHEIN and ROMWE. We have answered your query on whether SHEIN and ROMWE are the same and also provided information regarding their origin and relevance in the fashion industry.

(7 ways) How to get SHEIN points for Free?

Can you use more than one coupon on Shein?

Why does SHEIN refund without returning the item?

When does SHEIN have Free shipping (2021)

Dilha is a writer who loves composing poems and going into deep research on all kinds of tech stuff that they don’t teach in school.
anything that marks the extraordinary part of this generation excites her. she is currently persuing her degree in genetic engineering. here at Android Nature, she is assigned with various cool topics and is responsible for sharing cool insight and updates on the same.