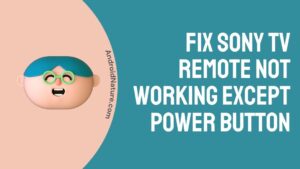 Remote plays a vital role in operating Smart Television & a failure of it could be problematic for its users. So, today to help you guys with one such problem, we’ll be addressing the “Sony TV remote not working” issue. Let’s quickly get started.

Sony smart television has originated in Japan. It is a product of the Japanese conglomerate industry, a manufacturer of consumer electronics products. Sony Corporation of Japan produces television sets among its various products.

Later on, Sony switched to the Bravia television hardware brand (2008-current year). On the contrary, the Bravia brand is a wholly-owned subsidiary of Sony Corporation.

From flat to curved screen Sony has tried its best to meet the tastes of its customers.

Sony TV has always been the apple of the eye of every technophile. The reason being, its ample pros. Let’s discuss some of them.

One should never ignore the fact that even humans have a shelf life, and nonetheless, this is still a TV remote.

Why is my Sony TV remote not working except power button?

If you are using the remote for long without removing the old junk batteries, it must be causing the issue. Use high-quality, brand new batteries & do check if the batteries are placed according to the polarity. Insert the positive and negative ends as depicted below.

If your Sony TV remote arises problems in changing the channels, your remote is probably in the wrong mode. If you have selected Satellite or Input, in that case, you cannot change the channels.

The remote may not work temporarily due to poor contact with the battery or static electricity (not according to the polarity), or the remote control battery terminals may be dirty.

It can be caused by an external factor, such as network service/data broadcasting/connected device, or by the unnecessarily connected devices, such as external USB hard disk, HDMI connection device, etc, and cables from the TV terminal.

How to Fix Sony TV remote not working?

First of all, you must remove the old batteries from the remote control & replace them with fresh ones according to the polarity (-/+) for approx 1 minute. If the issue persists,

Press the power button of the remote for 3 seconds.

Reinstall batteries into the remote.

Note: Never use a new battery and a junk battery (different kinds) together. Do not use a rechargeable battery.

Navigate to the Settings screen.

The next steps will depend on your TV menu options:

This way you can revive your remote to its working again.

The below methods are mentioned if the problem isn’t with the remote but with the television.

Reminder: Do not remove the TV power cable. Always take a note of the assembled wires to reassemble them.

When a specific device is connected and the TV flashes, there could be a problem with the connected device.

The problem with external factors is resolved by resetting the TV. Make sure you do that.

Press and hold the POWER button of the remote control for about 5 seconds, or until a message Power off appears.

The TV should restart automatically.

Wait for a while, and the TV will turn back on. If it does not reboot, press the POWER button on the remote control to turn on the TV.

Turn off the television > Unplug the Tv power cord from the electrical board.

Let it rest without power for 60 seconds > Plug in the power cord/mains lead back > Turn on the television.

How to use Sony TV without remote?

Operating your Sony TV without the help of a remote is slightly difficult, can be done by using the control buttons on the body of the TV, though the HOME and arrow buttons are not on the body.

Few functions, such as power ON / OFF, volume adjustment, or input selection, can be performed using the buttons directly on the TV. The number & type of buttons on your TV vary from model to model.

For model-specific information, refer to sony.co.in/

In this article, I’ve tried to provide all the possible causes & effective solutions in order to resolve the issue. Such as cleaning the remote control terminate, replacing the batteries, or resetting the device/gadget.

Make sure you go through all of the above-mentioned procedure thoroughly & do share it with the ones who you think are in need.

I hope it felt insightful & valuable.

Thank you for lending your eyes to this one! Have a mesmerizing day ahead you all!