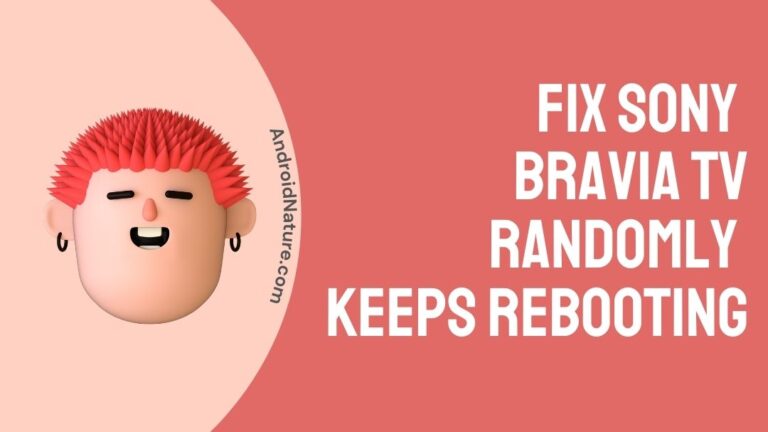 So many of us still like to unwind at the end of the day by turning on the television and seeing what’s on. In some ways, little has changed in decades.

We simply have a lot more options for how we can consume our stuff these days. Smart TVs now allow us to watch whatever movies and shows we want, whenever we want.

However, because these gadgets are significantly more complex than those that came before them, there are far more things that can go wrong.

Of all of these issues, the one that we seem to be hearing a lot about lately is the one in which a Sony Bravia just seems to get stuck, continuously restarting itself and not performing what it’s meant to do.

Given that this is quite frustrating even under the best of circumstances, we thought we’d put together this small guide to assist you.

Why is my Sony TV keeps rebooting?

If your Sony Android TV is constantly rebooting, or if it is stuck in an infinite restart loop, you may need to conduct a factory reset.

When the TV software malfunctions after a firmware upgrade and you are unable to do a conventional factory reset, the problem of persistent rebooting can occur.

The timer setting is frequently to blame for a TV that intermittently turns on and off. Check that the power cord is securely inserted into the rear of the TV when using a TV with a removable power cord.

If your TV goes on and off at regular intervals, such as every 30 minutes to an hour, it’s probably due to power-saving features like Idle TV Standby, on Timer, and Sleep Timer.

Check the Bravia Sync settings if the TV goes on or off when an HDMI-connected device is turned on or off. A loose connection, as well as an old power supply cord, can cause your TV to go down unexpectedly.

If you find frayed wires or damage to your TV’s power cable, it’s time to shop for a new TV to avoid further problems and potential electrical concerns.

Faulty capacitors within the power supply can potentially have a harmful influence. When the power supply fails, it disrupts the flow of electricity to the TV’s electrical components, causing the set to shut down. Replace the power source to resolve this issue.

Devices such as routers and USB wireless adapters may have an impact on your smart TV’s power switch. Several factors could be at blame for the frustrating restarts.

It is suggested that you check for and update any new firmware for your television. If that doesn’t work, you can try resetting your TV to factory settings, which will remove any programmes that may be causing this problem.

Sony describes how to unlock a television that restarts in a loop on its website. Unfortunately, the technique necessitates a return to factory settings, which means you will lose all of your personal data, installed applications, and settings. This method necessitates the participation of two individuals.

Step 1: Revert to the factory settings.

If your TV is stuck in a reboot loop, you can’t use the remote control (which connects through Bluetooth) or the Android TV menu to restart it. As a result, it is required to use the hardware buttons on the television. There are two possible setups. Either a layout with a power button on the front or on one of the slices.

There are two repercussions of reverting to the factory configuration. The first step is to delete your personal data and settings. The second is a return to a previous version of Android TV (the one that the TV had when it launched).

Step 2 concludes with your television being operational and up to date. Sony advises not recommend reconnecting your television to your router at first to prevent experiencing the same problem again and instead waiting for technical support to determine the cause of the problem and hence a solution.

You can, however, incur the risk of reconnecting it if you so desire (via Wi Fi or Ethernet). Sony recommends contacting technical support for tailored follow-up if the restarting problem reoccurs.

Step 3: The software could have malfunctioned.

Though we usually start these lessons with a step you can take yourself, we need to start with the most likely cause of the problem this time. The most likely reason of this resuming issue is a software crash. This is especially true if you recently downloaded a firmware upgrade, which resulted in a software crash.

The problem is that there is nothing you can do about it on your own. However, before we proceed to the next stages, we must rule it out as a possible reason.

Step 4: The TV could simply be overheated.

Another reason for a Sony Bravia TV restarting at random is that it may be forced to do so due to a power outage. It’s essentially a defence mechanism to keep it from completely burning itself.

When you think about it, it’s very ingenious – but still bothersome! To see whether that’s what’s going on, simply touch the TV and see if it’s very hot. If it is, simply allow it to cool for a few moments.

We would also suggest that you evaluate where you want to put the television. The most important thing your TV will require is space to breathe. As a result, make sure that nothing is blocking the vents and that the TV isn’t too close to a heat source.

The damage may already be done in some circumstances. If you suspect that a few components have fried themselves, your best option is to call in a specialist to take a closer look and assess the issue.

Power will struggle to get through if the power cord is broken in any way. One possible effect is that it will emit surges, confounding the TV to the point where it will reboot indefinitely.

As a result, we recommend that you inspect the power source for any evident evidence of damage or frayed wiring. If you are unsure whether it is in good condition, replace it. This manner, we can be positive that this is not the cause.

For the time being, it is all we have to offer in terms of solutions to this problem. Beyond these modifications, it all becomes a little too hard to tackle at home. At this point, the only obvious line of action is to contact customer service.

When you talk to them, make sure to tell them about all of the steps you’ve taken to resolve the problem. They will be able to narrow down the problem and advise you properly as a result of this.

I hope this works for you and that you are able to resolve the issue at home.

Thank you very much!