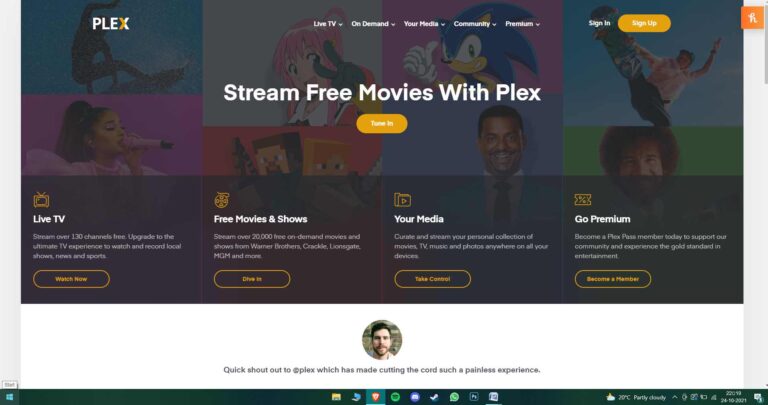 This article is about how to fix Plex Media Server not opening on a PC and all the known reasons why it happened in the first place.

There has been a running thread on forums in regards to this error message popping up for several unfortunate users.

We are going to make your doubts regarding this issue as we will mention why it happened and in this same article, we are going to help you in solving it easily.

Plex is a global streaming media service and a client-server media player platform, made by Plex, Inc. where users can enjoy free movies and TV shows. It also provides its users with over 180+ live TV channels even if you are not a Plex subscriber.

The Plex Media Server automatically organizes video, audio, and photos acquired from files, iTunes, iPhoto, the Internet, Aperture, and the user’s collections by metadata tags such as title, artist, album, genre, year, and popularity and finally streams them to the players.

The official clients and unofficial third-party clients run on mobile devices, smart TVs, streaming boxes, and web apps. You can also organize audio and visual content from personal media libraries and stream it to the player, either on the same device or on different devices.

Sometimes, like all software and apps, we face many problems while utilizing Plex. One of the most common problems is the Plex media server not opening when we really want to binge on our favorite shows and movies. As frustrating as it is, we can’t fix it sometimes. Let’s see why.

Why is the Plex Media Server not opening on PC?

Like many other issues, the Plex Media Server not opening also has several reasons – some known and some unknown.

Reason 1: You might have replaced the location of the Plex data folder.

Although there may be bugs that cause the server not to open in some devices, the most common and known reason why this happens is when you accidentally move your Plex data folder to another location.

Reason 2: Blockage of connection from outside sources.

There might be a connection blockage of the Plex Media Server’s port by a firewall.

Also Read: Plex vs Plex Pass: All you need to know about paid Plex Pass

How to fix Plex Media Server not opening on PC?

There are several ways to approach when you encounter Plex Media Server not opening on PC. Given below are some of the useful troubleshooting you can refer to.

This is the most direct and best way to ensure it doesn’t happen again. And your PLEX will feel good as new.

Originally or by default, the Plex server stores all data in the Windows user’s AppData path on the system drive.

If your system drive is a smaller SSD, or if you have capacity issues, you probably need to replace the location.

If you move the Plex data to a dedicated drive, it’s easier to keep your Plex server data when you switch machines or reinstall Windows from scratch.

We recommend a dedicated internal SSD for larger servers/collections.

It is always better to keep a separate folder for Plex.

Method 2: Turning off the firewall temporarily.

Check the plex media server log file for any errors

Make sure that you are connected to the internet, or else Plex will not be able to connect with other computers in order to share files

Check if there is a firewall blocking connections from outside sources

Method 3: You can consider resetting your plex media server.

If it doesn’t solve the problem, reboot your router, modem, and any other devices that might be causing interference with Plex Media Server’s internet signal

Update all firmware for all equipment involved in streaming content through Plex Media Server (including routers).

To reconfigure your PLEX Server, nicely this time:

Then go to the Control Panel and Stop any Plex-related background services which are running.

Copy the Plex folder or its contents to the new location or folder or location you have created.

The new folder or location or storage should not be in or the folder which has already been added to the Plex library.

It may take several hours or minutes depending on the size of your library but I guess you have to bear that through. Netflix? Youtube?

Open the registry editor, regedit.exe, go to the Plex Media Server branch and create a new string for your new library location.

Edit the string and insert it into the new location. Take note: the path entered cannot include “plex media server” as the last part.

For example, if your Plex data is in ‘D:\plex\plex media server\’, just enter ‘D:\plex\’ in the input field.

Close the registry editor and restart your computer.

Voila! It should pop up in no time without any hiccups.

Once you verify that everything is working, you can delete the old plex data directory.

If you have problems with Plex Server Backup settings after moving a data folder, you may need to redirect the Plex Updater service to the new data folder location.

If all else fails, there are always the good people of Plex Media Support!

Well, there you have it!

We’ve given you a one-way train ride home to fix your Plex Media Server not opening on PC.

If you encounter any other methods, please let us know!

Thank you for reading and you should check out our other well-researched articles.

(6 Ways) Fix Plex your changes could not be saved error

How to import playlists to PLEX