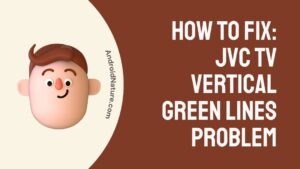 Have you ever wondered why your JVC TV has vertical lines and if it’s possible to fix them?

Obviously, you did. That is why you are here.

When lines appear on the screen, it is an annoying occurrence that can be caused by various problems with the television itself. JVC televisions are praised by many for having a high visual impact and the ability to produce images that are displayed on a large screen. However, this feature is called into question when lines begin to appear on the screen.

However, despite the fact that it is definitely frustrating, this kind of thing happens really frequently. There is absolutely no need for you to be alarmed.

It is possible to fix the TV so that it returns to its former state, and you do not necessarily need to get in touch with a specialist to handle the problem.

This page will discuss the factors that led to the vertical lines’ appearance and offer advice on how to correct the problem.

What causes horizontal/vertical green lines on the JVC TV screen

Short Answer: Green lines running horizontally and vertically across the screen of a JVC TV are caused by poorly connected cables, a problem with the DLP, other devices connected to the TV, a cracked processing board, or a T-Con board issue.

Displaying vertical lines on a JVC television is not something that happens very often. When something like this occurs, it indicates that there is an underlying problem that is causing the difficulty.

If you notice green lines running vertically across your TV screen, the first thing you should do is try to pinpoint the major source of the issue. In the beginning, you should test the picture, check your cable connections, and make sure that all of your other devices are functioning properly.

Reason 1 – It could be a DLP issue

Due to the use of DLP display technology, JVC televisions are susceptible to developing vertical lines. Just what is the DLP? The projection of pictures is accomplished through the use of a technique known as digital light processing (DLP), which makes use of micro-mirrors.

Possible causes of the vertical lines on your screen include a faulty wire or cable.

Every electronic gadget relies on its cables to properly link its essential parts as designed by the manufacturer. A device’s performance suffers if its cables aren’t properly connected.

There are a lot of HDMI cables on a JVC TV, and if you don’t connect them properly, you may see vertical lines on the screen. However, transmissions can be disrupted by any other poorly linked cables, resulting in horizontal or vertical lines.

Reason 3 – Other devices connected to the TV

It’s possible that they’re having problems of their own, or that they just aren’t compatible with your TV. In this particular scenario, you will need to examine the gadget rather than the TV.

It is possible that it is something else, such as a fractured board caused by improper handling or an earlier repair. It’s also possible that dust has accumulated in the components of the motherboard.

Unless the TV is taken apart, it is difficult to determine whether or not this component is the issue.

If you are seeing colorful lines running horizontally, it is possible that the T-Con board is to blame. It’s possible that the lines on the screen are being caused by this component of the TV, especially if other sections don’t seem to be the problem.

Problems with the software are simple to diagnose and fix. If the problem is with the device’s hardware, however, you will need to contact the device’s maker or a professional for assistance.

The following is a list of potential options for you to consider.

Simply rebooting the device will repair the green vertical lines that are appearing on the screen of the Tv, and if you are getting any problems with the JVC TV power cycle then you can check out our other blog fix JVC TV won’t turn on.

It is possible for the signal to get garbled and for there to be vertical or horizontal lines if the cable is defective or if it was not attached to the input or output ports in a secure manner.

Experiment with the following:

It’s also possible that your external device is broken, which would cause these lines to appear. Blu-ray players, game consoles, and set-top boxes are all examples of gadgets that fall under the category of external devices.

In the event that the gadget is broken, you will need to either fix it or replace it. If you want to be absolutely certain that the particular gadget in question is the problematic one, you should test it out beside another device.

Method 3 – Verify that the image settings are correct

Checking the picture settings on a TV is the way to get rid of a green line that appears on the screen.

On the majority of televisions, the visual display may be modified by adjusting aspects such as the aspect ratio, screen resolution, and horizontal or vertical scan frequencies. In this scenario, the picture format settings should be adjusted according to the instructions provided in the user manual for the external device.

The gadget is controlled by the software on your TV. An outdated software package can lead to a variety of issues, including poor visual quality, vertical lines, and the inability to install new applications.

You can attempt to resolve the issue by installing the latest software update. For information on how to update the software on your TV, consult the owner’s handbook.

In certain instances, the JVC TV will be unable to process the various visual adjustments that you have chosen to apply. This may result in a number of image abnormalities, including lines that flicker on the television. Even while you may go through each setting individually, you might want to consider resetting your device instead.

Resetting your television to its original factory setting should only be considered a last resort. This is due to the fact that it will delete all of the data, including the settings on your device. On the bright side, it gives you the opportunity to begin over.

Method 6 – Check the TV hardware for any damage

It’s possible that a faulty T-Con board is the cause of vertical lines appearing on an LCD panel. The T-Con card, also known as the timing control card, is responsible for controlling the timing of the pixels that are displayed on the screen. If your T-Con board has developed a defect, your only options are to get it repaired or replaced.

You are able to remove the T-Con board on your own and install a brand-new one in its place. However, if you decide to go with that alternative, you will have to use extreme caution so as not to damage anything on the television.

The most effective course of action would be to get assistance from a qualified specialist. If the manufacturer’s warranty is still valid for your television, you should contact them for additional assistance.

A JVC Tv that has lines on it can be fixed in a few different ways. You might, for instance, switch channels to see whether the lines display on all of the changes, alter the source of the input, check the cable connections, or power cycle your device to see if it helps.

However, if the issue is with the hardware, you should not attempt to fix it if you do not have the necessary experience. Instead, for additional assistance, you should get in touch with the device’s maker or a professional.

Why Won’t My JVC TV Connect To The Internet?