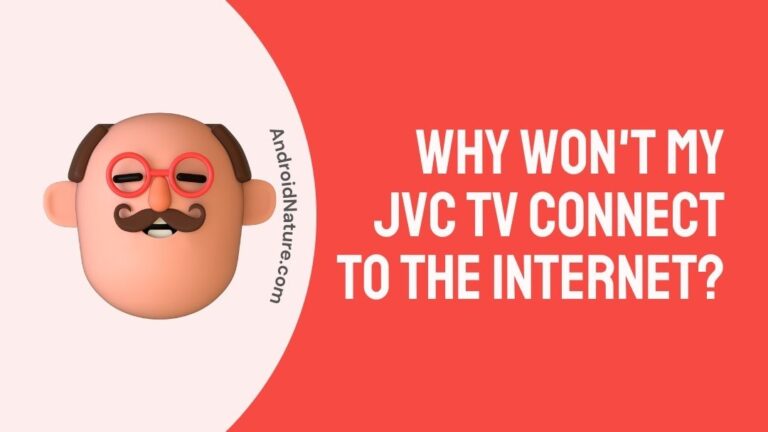 If your JVC TV isn’t connected to the internet you have landed on the right page.

Smart TVs have fundamentally altered how we take in media. Notably, the large-screen televisions are no longer dumb boxes; they do more than just transmit the channels from the local broadcasting company.

Although JVC TVs are generally reliable and inexpensive, there have been instances where the TV has been unable to connect to Wi-Fi and thus prevented the user from streaming content.

Numerous potential causes might result in your JVC TV being unable to connect to the wifi network in your house. In this section, I will discuss some of the most typical reasons for, and solutions to, the issue.

Continue reading if you are unable to connect your JVC Smart TV to the network in your house and find yourself in this situation. If you are experiencing problems connecting your TV to the internet, the following are some things that you should check.

Why won’t my JVC TV connect to the internet?

Short answer: Your JVC TV can’t connect to the internet because JVC TV is outdated, It’s too far away from the router, or there are already too many devices on the network. It could also be because the MAC address of your TV has been changed.

JVC produces a broad variety of smart TVs, each of which comes equipped with all of the capabilities that a contemporary smart TV should have.

However, in order to carry out these tasks, it is absolutely necessary to have an active internet connection. Users are unable to utilize the bulk of the TV’s functionality if they do not have a connection to the internet.

If your smart TV is unable to connect to the internet, then it completely defeats the purpose of having a smart TV in the first place.

There is a possibility that the JVC TV will occasionally lose its connection to the wireless router. The primary reason for the poor signal is the physical distance that exists between your JVC TV and the router.

When several devices are joined to the same Wi-Fi network, the connection speed will be reduced for all of the devices that are connected.

This problem could potentially be caused by outdated firmware.

There is a possibility that the MAC address of your TV has been altered; in this case, you will need to reset the TV to the factory settings it had when it was first purchased in order to get the MAC address to return to its original state.

How to Fix JVC TV Won’t Connect to Wi-Fi

If your JVC TV is unable to connect to Wi-Fi, the following is a comprehensive list of troubleshooting solutions you may attempt.

It’s possible that the wireless settings on the JVC TV, along with other settings and components linked to it, were corrupted.

By doing a power cycle or a soft reset, the TV will be restarted, and any applications or background activities that may be contributing to the Wi-Fi connection difficulties will be terminated.

Put the TV in the off position and remove the power wire from the wall outlet. At least one minute should pass with the cable not plugged in. It is essential that you wait some amount of time before turning on your television again.

After you have reconnected the power cable, turn on your television. At this point, your JVC TV should have no trouble connecting to your Wi-Fi network. Try the next technique on this list if your JVC TV still won’t connect to your home Wi-Fi network.

The settings of your Wi-Fi router and modem may become damaged if it hasn’t been shut off or restarted in a while, as this prolongs the amount of time that the router is left on. This may result in the Wi-Fi connection becoming disrupted at various points.

If this is the case, cycling the power to the devices that make up your networks, such as your router and modem, may be of assistance. Resetting the power supply is one possible solution to problems with the network.

To do a soft reset on the Router or Modem, follow these steps:

Bringing the firmware on your JVC TV up to date might sometimes assist alleviate difficulties that arise with the connection. This includes correcting difficulties such as poor Wi-Fi signals or having no Wi-Fi connection at all with the device in question.

JVC will from time-to-time issue new software upgrades in order to correct errors. It is highly recommended to download them as soon as they become accessible.

You should be able to locate the most recent firmware version for JVC televisions by heading to the TV Settings menu. Alternatively, you may check the JVC website for the newest version.

If you want to upgrade the firmware on your JVC TV through the TV menu, follow these steps:

The television will automatically restart itself for the latest firmware to install completely and take effect.

To revert the JVC TV’s network settings to their factory defaults, follow these steps:

Make another attempt to connect to your Wi-Fi network. It should now be possible for you to join to the Wi-Fi network using this method.

You will need to check that the firmware on your router or modem has been updated to the most recent version to ensure that it will not disrupt the wireless signal in any way or be incompatible with it.

Check the website of the manufacturer of your router for the most recent firmware update as well as information on how to upgrade the router’s firmware.

Many issues with Wi-Fi and internet connections can be remedied by resetting the JVC TV to the factory default settings. These issues typically arise as a result of software mistakes.

Because performing a factory reset would delete any personal information that has been saved on your television, including passwords, usernames, and favorites, this is one of the final non-hardware solutions that you should try to repair the issue.

To conduct a factory reset on your JVC TV, you will need to follow these steps:

In conclusion, that is all we have to say about this topic in this post. We really hope that this post was helpful to you and that you were able to resolve the problem with your JVC smart TV not being able to connect to the internet.

Quite a few people have successfully solved difficulties with their JVC smart TVs by applying the procedures described above. Please let us know which of the aforementioned approaches was successful for you.

[6 Ways] How to Fix JVC TV sound but no picture?