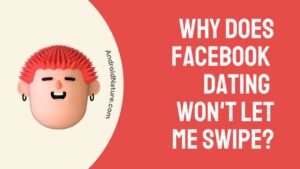 If your Facebook dating won’t let me swipe you have landed on the right page.

In the recent past, dating apps have seen a meteoric rise in popularity among those who are unattached, and several websites have recorded an increase in the number of downloads and subscribers as a direct result of the epidemic.

Facebook has developed its own dating application, which has proved rather popular among its users. You are able to meet someone who shares your interests and leave comments on their profiles via the use of this website.

However, some Facebook users have periodically reported having issues with the dating function provided by the social networking site.

Whether it’s due to their program crashing frequently or users being unable to swipe, something is wrong. This page contains a rundown of all the possible explanations for why Facebook Dating won’t allow you to swipe on your device, as well as the solutions that are linked with each of those explanations.

Short answer: You can’t swipe on Facebook Dating because the servers are down, your internet is slow, the app is out of date, access to your area is limited, you’re underage, or you’ve reached your swipe limit.

These days, online dating programs are all the rage, and it seems like a new one comes out every single week. Every one of them relies on a unique selling point or gimmick to bring in new customers and retain existing ones.

Facebook has introduced a new service known as Facebook Dating, which allows users to meet new people in their local area. You’ll have the opportunity to meet new people and even embark on a romantic connection with the person of your choice thanks to this function.

The very first scenario is that the server that supports the Facebook Dating service is now experiencing some kind of issue. Given the current circumstances, you are not the only one who is experiencing this issue; thus, you should wait for some time until the Facebook server functions normally.

The second possibility that your Facebook Dating feature is not functioning correctly is that the problem is with your internet connection, which might be either slow or unreliable.

You will not be able to use the most recent features of this platform if the version of the Facebook Dating feature that is currently installed on your device is an older one. In addition to that, it could cause errors to be shown.

You will not be able to use the Facebook Dating feature from any platform if it is not accessible in your country or area. This applies even if it is available in other countries or regions.

There is a swipe limit on Facebook dating. It will stop you from swiping  if you consistently match without communicating with your matches

Short Answer: Yes, there is a swipe limit on Facebook dating. It will stop you from swiping if you consistently match without communicating with your matches. Therefore, it is advised that you text a match with about 10 of your matches.

Facebook Dating was released in 2019, and despite the fact that a very small number of individuals are utilizing it, Despite the fact that there aren’t that many people using it, it is a good alternative, particularly for those who don’t want to download yet another dating app or start from scratch when creating their profile.

After you have finished creating your profile, you will be able to begin the matching process. Facebook has adopted Tinder’s swiping function, which allows users to indicate their level of interest by swiping left or right. If you want to see more of someone’s profile, you may scroll down.

On the other hand, similar to Tinder, users are only permitted to right-swipe on a maximum of 100 profiles in a period of 12 hours.

Facebook has a swipe limit too you will receive it if you consistently match without communicating with your matches. You can match again once you’ve messaged for a match with around 10 of your matches.

One of the many wonderful advantages of using Facebook Dating is this. After pressing the button, you will be able to begin swiping those who have previously indicated that they are interested to the left (no) or the right (yes).

If you provide a right swipe to any user in this section, you will instantly be matched with them and given the option to communicate with them. And the last tab is where you’ll see the matches you’ve been looking for and where you can begin conversing with them.

There is a section of the settings called ‘General’ that contains an option called ‘Second Look’. This option gives you the ability to revisit and see an infinite number of profiles that you swiped left on. Other dating apps do not enable this nifty function by default because it requires users to pay for it.

After you have finished creating your profile, you will be able to begin the matching process. Facebook has adopted Tinder’s swiping function, which allows users to indicate their level of interest by swiping left or right. If you want to see more of someone’s profile, you may scroll down.

Facebook users have the ability to establish a separate dating profile within Facebook, ‘like’ up to one hundred profiles each day, and communicate with one another anytime another user ‘likes’ both of their pages.

If you’re a single guy looking for a date, you should absolutely give the dating app on Facebook a shot because it’s completely free and it actually works.

The dating app will continue to expand in functionality and user base as time goes on due to the ever-increasing popularity of Facebook.

Since it was released to the general public for the first time, the software has been updated to include new features, one of which is the ability to swipe through profile pictures rather than touch on the icons.

What Does ‘Taking A Break’ On Facebook Dating Mean