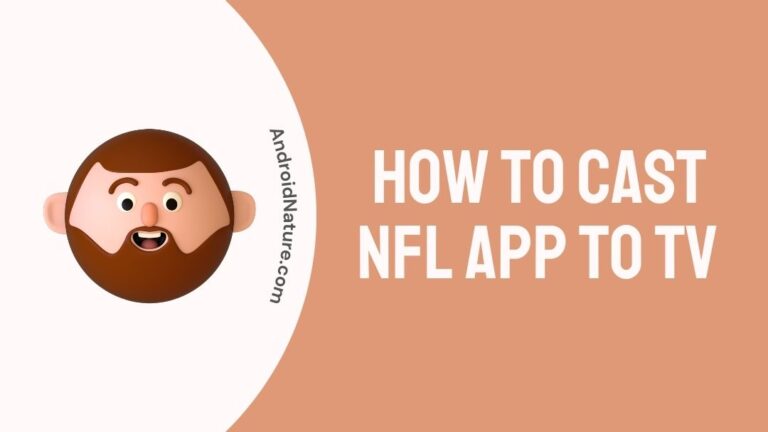 Do you want to cast NFL app to your TV?

You can cast NFL app to your TV using three methods discussed below in the post.

The National Football League’s official app, NFL, is the ideal, pure football app for every fan, with live local and primetime games, engaging clips and highlights, and replays of every game with NFL Game Pass. The NFL app now has more content than ever before.

The NFL app keeps fans up to date with latest NFL news, highlights, stats, and more during the off-season. The app has you secured regardless of your location.

The NFL Network application gives easy access to the sports channel, allowing you to log in through your cable provider and watch either the regular NFL Network or Red Zone programmes.

When viewing a show, the app is simple to use since you may increase for a full screen or retain a smaller screen. Users may also see the entire schedule for that day and the days ahead.

The NFL app does, in fact, make it possible for users to mirror their screens, and it does it in a straightforward manner. Having said that, there is a catch.

The content that is available with NFL Game Pass cannot be transmitted to your television or any other connected device. The only way to access the material is through using the NFL app on a device that is compatible with it.

Because of this, screen mirroring is something that can only be done if the app in question is already installed on the mobile device in question and the user intends to see the whole thing on a larger display, such as a television.

How Do I Cast The NFL App To My TV?

The NFL app is now compatible with Samsung and LG smart televisions (but not yet available on LG webOS 5.0). You won’t have to worry about anything at all if you own one of these TVs since it eliminates all of those possibilities. You need to make sure you complete the following:

Click “Install” to begin downloading and installing the NFL app on your smart TV (Samsung or LG).

When you click “Open,” the NFL app will start followed by an activation code which will be displayed on your screen.

Enter the code and press “Continue” to activate the app and sign in to your NFL Game Pass membership.

This process will only work for those who have a Samsung smart TV in their possession. Screen mirroring, also known as screen sharing, is a feature that allows you to see content on your smart TV on the display of your mobile device. The Samsung SmartThings app, which is compatible with both iOS and Android, makes this feature simpler to use than ever before.

Here’s how you do it:

Join the same Wi-Fi network as your Samsung smart TV and smartphone.

Launch the SmartThings app on your mobile phone and select “Add Device.”

Select “Smart View” to display your smartphone’s screen on your Samsung Smart TV.

Install and start the NFL app from your smart phone’s App Store or Play Store.

Connect to the NFL Network and see the content on your television.

Screen mirroring functionality is available on the vast majority of modern smartphones. However, the phrase “activating the function” may be referred to in a variety of ways depending on the particular phone in question.

From the top-right corner, scroll down to open the “Quick Settings” panel, then look for the “Cast” option.

If the option isn’t visible, click the “Edit” button and find the “Screen Cast” toggle.

Hold down the “Cast” button and drag it to the “Quick Settings” window.

To begin mirroring your phone, select the “Screen Cast” button and choose your TV from the list.

Connect to the same Wi-Fi network that your smart TV and iPhone are on.

Scroll down from the top-right corner of the iPhone to open the “Control Center.”

Select “Screen Mirroring” from the menu (Cast button) and then choose your smart tv from the options.

At the moment, NFL Game Pass does not allow casting.

Your NFL Game Pass material, on the other hand, is accessible via the NFL App on your linked device. Users outside of the US, Canada, and China should refer to the Game Pass INTL Guide, DAZN guide and

Q2. What devices are supported on the NFL App?

The NFL App is available with iPhone, iPad, and iPod touch and is supported by Android 10+ and iOS 13+.

The following devices have been tested and optimised for NFL Game Pass:  iOS 13+ phone and tablet; Phones with Android 10+ and tablets with Android 710+; FireTV ; Apple TV; Roku (Domestic Only); Android TV; Xbox, Xbox X series, and Xbox S series; PS4 and PS5. NFL Game Pass may not work correctly if your device is not mentioned below.

Q3. Is it possible to watch NFL Game Pass on Roku outside the US?

Unfortunately, not at the moment.

We are currently giving many options for our users all over the globe for how to use our service, but we do not presently support Roku.

Q4. Can we watch NFL live and free?

The answer is yes you can.

There are two options other than the NFL app itself – Yahoo Sports and Lowcast!

Q5. Can I watch more than one game simultaneously?

Yes, you can. Just look for the multi-view option!

Using our multi-view function on the web edition of NFL Game Pass, you may watch more than one live game at the same time!

Q6. How can I avail the multi-view feature?

You have to use HTML5.

Multi-view feature of the NFL Game Pass is quite easy to avail. When using HTML5, the multi view option lets you view up to two games at once.

Then go ahead and pick the live games you wish to watch by simply clicking on the blue dot in the top right corner.

Q7. How many devices can I operate with my NFL Game Pass subscription?

It is possible to add up to five devices.

Your NFL Game Pass membership allows you to use 5 devices at the same time to watch the NFL in the ways that are most convenient for you.

To summarise, we found that the broadcast option is not accessible on older mobile devices but is there on more recent models. Use the Google Home app if the functionality is not available in the version of Android you are using.

Use the Google Chromecast instead of your iPhone if it does not have iOS 13 or a later version of the operating system. You need to discover a way to access their content since the National Football League is popular not just in the United States but also in other parts of the world.

Streaming of games is possible everywhere in the globe with an NFL Game Pass subscription; however, there are some potential restrictions.