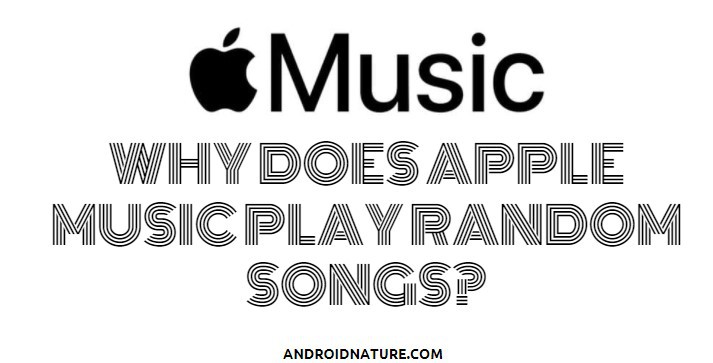 Apple Music has the complete luxury of downloading, browsing and listening to millions of songs, along with its convenient provision of listening offline. However, we are going to highlight a common glitch users face while they enjoy their favorite tracks; why does Apple music play random songs?

Although it is not a pressing matter, we must emphasize a user’s convenience while he or she tries to utilize their free time with the help of some soothing or contrasting tracks.

Music can help a person in many ways, so maybe, being the last resort for relaxation after a tiring week, one would hope to have a steady set of songs playing in their air pod and not randomly, thereby disrupting the flow.

In today’s article, we will examine the various causes and some easy hacks to resolve apple music playing random songs.

To be more specific about the problem, the songs might start to play at random after the end of a playlist or it just starts playing automatically. This issue has a number of causes and we are going to explain them below. Keep reading.

There are some general settings that you could modify to overcome this situation where Apple plays random songs.

Apple Music can give you a preset list of tracks played soon after you stop giving any choices of songs. But the users would expect the songs to just come to an end or restart the playlist. You can alter this outcome by changing the Autoplay setting on your Apple music.

In this case, Autoplay must have been turned on, which causes random songs to play that are picked automatically based on your usual choice of songs. So uncheck the Autoplay option (the infinity icon) and you will get your playlist tracks playing in rotation, rather than moving on to random songs once the playlist is complete.

It is frustrating to find your Apple music playing a different song from the one that you selected. Many users have reported this issue and we have jotted down this simple method to resolve it with ease.

Users who have subscribed to the iTunes Match feature may find this issue occasionally. Unlike the usual features that come up along with Apple Music, iTunes Match was a huge innovation that had the skill to map out all and every track that you have ever played or downloaded. And using this, it would create a calculated playlist which will then sync with your Apple Music.

Now, iTunes Match is not controlling your entire library as some users assume. So disabling this feature won’t cause any loss to your existing libraries.

Here is how you can fix the above-mentioned issue. You will have to disable iTunes Match as the first step. The details on how to go about this method are explained in the following steps. Keep reading.

This step will disable the iTunes Match option from your device. The next step is given below;

Here is how you can clear all downloaded tracks from Apple music;

The glitch will have disappeared with this method. Hope it helps.

The timer feature in Apple Music is definitely handy in bringing the songs to an end, without your physical effort of pausing the list. Here is how you can set a timer, which comes to an end along with the songs. No more songs will play after the timer ends.

This feature allows your device to automatically play any kind of media content that you may have left in between, in another Apple device. So disabling this feature can make a great difference in the habit where Apple music play random songs.

SEE ALSO:  Why does my Apple Music stop when I open Facebook?

There are several reasons due to which Apple music plays random songs. It could be caused because the Autoplay option is enabled which causes random songs to play soon after your desired playlist comes to an end.

This should start afresh the pattern of songs in your Apple music and proper sync with iTunes Match. The measures to take up when going about these settings are given in the above article. The steps are briefed for your convenience. Hope it helps.

Q2. How to stop Apple Music from automatically playing?

You can stop Apple music from automatically playing by turning off Autoplay. For this, just tap on the playlists icon situated at the bottom of the screen. This will open up the list of songs that are waiting in cue.

Click on the Autoplay icon which will appear as an infinity symbol, nearby the song name. This will disable the music from playing automatically, after the selected song’s end.

You can also try to disable the Hands-off option or try to keep a timer that will stop the music once the time is up. More details are given in the above article.

This article explains how to fix an issue where Apple music plays random songs. Various methods are provided with a step-wise guide on how to proceed with it. Hope it helps.

[Fixed] Why is my Apple Music stopping at 15 seconds

If I rejoin Apple Music will I get my music back? (Yes, Here is How)