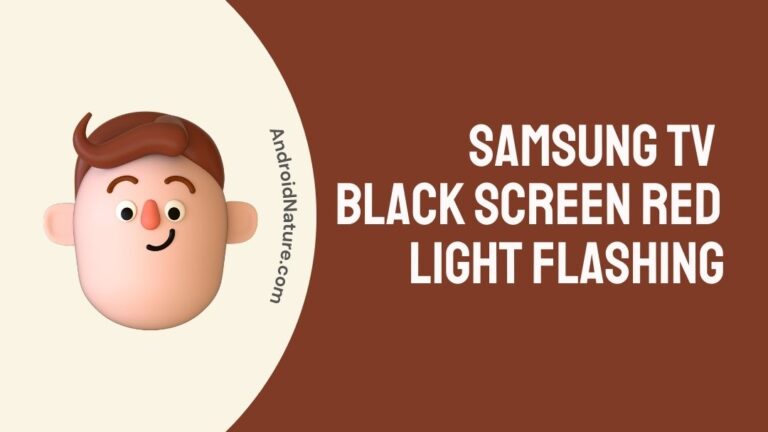 If your Samsung TV black screen red light flashes you have landed on the right page. Here, we have provided the reasons why it may happen and how to fix it.

Even today, televisions remain one of the most widely used and desired entertainment options. It’s almost impossible to picture a house that doesn’t have a tv in it. A wide variety of brands are available to pick from when shopping for a new television, with Samsung TV being among the most well-liked of those now available.

However, even with these TVs, there is still a possibility of experiencing some problems. It is not a reflection of the quality of the brand; rather, it is only an inevitable aspect of the technological world. The flashing red light that users sometimes see on their televisions is one of the most prevalent problems they experience.

If you are also having this problem, don’t worry about it too much because there are several things that you can do to fix it. Continue reading to find out the reasons and fixes for this issue.

What Does the Flashing Red Light on a Samsung Mean?

Short answer: If the red light on a Samsung TV is flashing, it means that the TV is either getting too much or too little power.

The issue with the blinking red light is something that no owner of a Samsung TV wants to witness. This is a widespread issue that affects a subset of Samsung’s smart TV models, despite the fact that Samsung has emerged as one of the leading manufacturers of smart TVs in recent years.

This is evidenced by the fact that the television set itself will not power on; instead, the indicator light flashes five or six times, followed by a barely audible clicking sound. If this is an issue for you, know that you are not the only one.

It is likely that you have a problem with the power board of your TV if the red light on your Samsung TV blinks five or six times when you try to switch it on. If this happens to you, contact Samsung customer service immediately. Either that’s the case, or there’s a problem with the backlight LEDs on your device.

When it comes to certain other brands, there could be some kind of code that you can decipher in order to attempt and figure out what the issue is. However, if you have a Samsung TV, this is most certainly not a sign of the primary problem.

Why is my Samsung TV blinking red and not turning on?

According to several recent reports, Samsung TV owners have been reporting problems with their devices, including instances in which the red light remains on but the television itself does not come on.

This issue is often brought on by a faulty power supply, but it is also possible that it might have been brought about by a glitch in the HDMI interface in rare instances.

The following is a list of some of the possible explanations for why your Samsung TV is displaying a flashing red light:

If you have a Samsung tv and you see a flashing red light, the power supply is the most likely culprit for the problem. This power outage may have been brought on by a malfunctioning electrical wall socket or by a power surge that caused damage to the power source.

If you turn off a gaming console or other device connected to your TV without first switching the HDMI input back over, this might cause the source input on the TV to malfunction. As a result, this bug has the potential to prevent the TV from turning on.

It is possible that the ability of your Samsung TV to connect to other devices will be impaired if it was separated from its power supply while the software was being updated.

If your Samsung TV has been damaged in any way, including being dropped or being wet, this might result in hardware issues that prevent the TV from starting up correctly.

On a Samsung television, the presence of a blinking red light might sometimes point to a major problem with the hardware.

Altering a few settings on your television, on the other hand, could be enough to solve the problem in certain instances. The following steps need to be taken in order to troubleshoot a blinking red light on your Samsung TV

We are going, to begin with, a solution that is relatively straightforward. In the event that your television is displaying a blinking red light, it is recommended that you power it off and then back on again. If you do this, the problem may be resolved.

There has most likely been an issue with the power supply to the TV, which is why the indicator light has been flashing. There is a possibility that the power IC has experienced some kind of disturbance.

If you leave the TV on for an extended amount of time, it will cause the integrated circuit to overheat, which will result in a flashing red light.

Therefore, in order to resolve this issue, you need to check that the power IC has reached its normal operating temperature. Restarting the TV is the most effective method for accomplishing that goal.

When launch configurations become corrupted, it is possible that the television will not be able to turn on in the right manner.

Because of this, during this stage, we will be power-cycling the Samsung TV in order to thoroughly clean all the launch configurations, which will then be regenerated by the TV on its own. Because of this:

Method 3 – Unplug all HDMI devices from the TV

If you have any game consoles, soundbars, or other devices connected to the HDMI connection on your Samsung TV, you will need to disconnect them before you can turn off the TV.

After a ten-minute break, you should give it another shot at starting up. It is possible that this will reset the device if the blinking red light was caused by a problem with the HDMI connector.

Checking the screen is the next thing to do if there are no evident signs of damage anywhere else on the television. If the LCD screen is operational, causing a visual rippling effect on the screen by pushing on it gently with the tip of your finger should provide the desired result.

If the screen does not respond, the problem may not be the power source but rather the monitor of the television.

If the solutions presented above did not resolve the problem, it is most likely a hardware-related issue. As a result, it is strongly suggested that you get in touch with Samsung’s customer assistance as soon as you are able to and bring the TV in for maintenance as soon as possible. You may also submit a claim with Samsung’s customer service department if it is still covered under the warranty on the product.

However, there is a high probability that the issue lies deeper within your television’s mainboard and is the root of the problem. This is the most likely explanation.