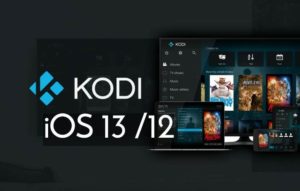 Kodi, the most popular media software on earth, lets you stream almost every video content out there on the Internet. Well, if you are interested in installing Kodi on your iOS device and finding the procedure hard, we are here to help you with that. We will mention the detailed procedure to install Kodi on iOS. You just need to follow the mentioned steps carefully. Here is how to download Kodi for iOS 13 / iOS 12 devices.

What is Kodi? Why is it popular?

Kodi is the most popular content streaming software in the world, which is being used actively by millions of users around the globe. Kodi is developed by the XBMC and launched earlier as XBMC (Xbox Media Center). It is a free-to-use media player software, and the top of it, Kodi is open-source software, which attracts a lot of audience and developers.

Another factor that contributed to the high popularity is the availability of the software on an extensive range of platforms – Windows, macOS, Android, iOS, Linux, and even on Raspberry Pi and we are not done here, a lot more is on the list.

Kodi lets users stream a variety of content which is present on the Internet or local storage. With the latest version of Kodi, you can stream videos, music, videos, and podcasts from the Internet, as well as all standard digital media files from network storage media. The software is a little challenging to understand and use, but you will be getting a lot of perks in exchange. And this is another reason why Kodi is so popular.

Users can run Kodi on smart TVs too; for this, the software comes with a software 10-foot user interface making it compatible with remote control for a smart TV. Kodi is also famous for its wide range of plug-ins, which allow users to stream content from various services like Youtube, Prime Video, Spotify, Crackle, Pandora Internet Radio, Rhapsody, and a lot more. Not only this, but the latest version also supports personal video recorder (PVR) graphical front end for receiving live television with electronic program guide (EPG) and high-definition digital video recorder (DVR) support. List of Non-Jailbroken devices: iOS 5.1.1 or higher and also a Mac Computer which running Xcode 7 as well as higher.

Here, we have mentioned the steps to download Kodi for iOS 13 on various eligible Apple devices. The steps mentioned here are for the devices with Jailbreak. So, make sure that you are done with the Jailbreak procedure. Also, the device should be installed with Cydia software. If you have completed the steps mentioned above correctly, you are finally done with the steps for how to install Kodi on iOS 13 / iOS 12 devices.

You can launch the Kodi app on your device and start streaming TV series, movies, songs, podcasts, and a lot more. And in case you face any issues in installing Kodi on your device, you can ask for assistance in the comments section below.

Aditya Murkar
Majorly tech savvy. Updated with the Android Ecosystem. Also have considerable knowledge of gadgets and devices. I follow the tech and innovation industry with passion. Well versed with Linux and other operating systems.