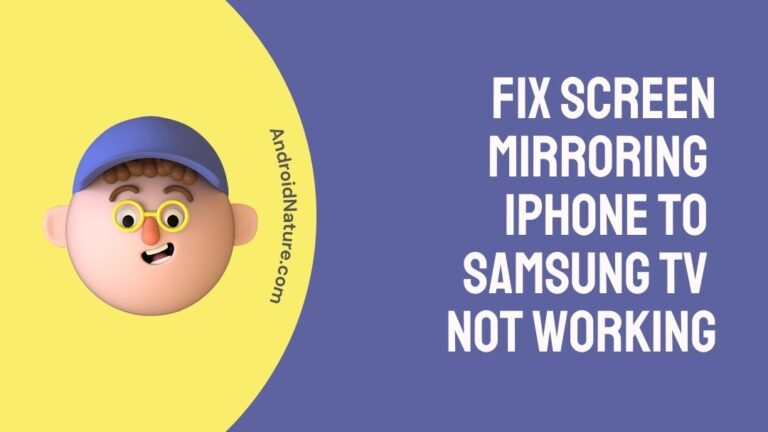 If your screen mirroring iPhone to Samsung TV is not working you have landed on the right page. Here, we have provided the reasons why it may happen and how to fix it.

Screen mirroring is a function that is becoming increasingly widespread on newer pieces of technology. This feature enables users to cast material from the display of one device to the display of another device. There are several names for screen mirroring, however, Apple products use the term “AirPlay” for this functionality.

Even though AirPlay is an Apple feature, connecting devices from different manufacturers’ ecosystems have gotten considerably simpler since the introduction of AirPlay 2 in 2018. It is quite probable that you will be able to utilize AirPlay if you have a Samsung Smart TV that was manufactured in 2018 or later.

The failure of screen mirroring to function can be brought on by several issues relating to both the iPhone and the Samsung television. As a consequence of this, we will examine each contributing factor in greater depth.

Why can’t I screen mirror my iPhone to Samsung TV?

Short answer: You can’t screen mirror your iPhone to a Samsung TV because both devices are incompatible, the Samsung TV and iPhone are too far apart, there is a physical obstacle between them, both devices have outdated firmware, or they are linked to separate networks.

Screen mirroring allows users to project the display of their mobile device onto a larger screen, such as a television or computer monitor, which is useful for many people’s jobs.

If you have ever viewed a movie on a large TV using your mobile device, you have probably already utilized AirPlay. The function operates faultlessly on the vast majority of compatible hardware.

On the other hand, it is not entirely devoid of mistakes. There are occasions in which it experiences hitches and does not function in the manner anticipated.

If you are experiencing this difficulty as well, there are a few solutions that you may use on your devices to work around the problem. This article will walk you through some of the fundamental troubleshooting steps you may take if screen mirroring on your Samsung or another brand of TV is not functioning properly.

The following are some of the reasons why screen mirroring from an iPhone to a Samsung TV is not working:

If you are having trouble getting screen mirroring to operate on your Samsung TV, the first thing you need to do is determine whether or not the TV is compatible with the feature. There is a wide range of iPhone devices and televisions available, each with its unique compatibility with screen casting.

Certain older Samsung TVs aren’t directly compatible with airplay, but you might be able to connect them by using a different device.

Reason 2 – Samsung TV and iPhone are too far apart

Another possible explanation for why the screen mirroring feature on the iPhone and Samsung TV is unable to operate together is that the two devices are physically too far apart. Even while Wi-Fi has a very large range, if you are on the very edge of that range within your home network, you may still experience connectivity issues.

Your mobile device will have an easier time connecting to the TV if you move it closer to the screen of the television. You should be able to put some distance between yourself and the device when it has been connected and the screen mirroring has begun.

Because the screen mirror function makes use of wireless technology, you need to check to make sure that there are no tangible items that might be generating interference between your phone and your TV. Before attempting to connect your phone to your TV, make sure there aren’t any things in the way by removing them first.

There is a possibility that the current Airplay issue is being caused by the Samsung TV’s out-of-date firmware, and that the problem can be fixed by upgrading the firmware of the Samsung TV.

Reason 5 – Both devices are connected to different networks

It’s possible that some people aren’t aware of this, but in order to mirror your screen, both devices need to be connected to the same Wi-Fi network. The signal is sent from your device to the TV in your house by using the Wi-Fi network that is already there.

How to connect iPhone to Samsung TV using screen mirroring

You may view and enjoy movies or TV series whenever you want and wherever you are if you have an iPhone. On the other hand, there is nothing more captivating than seeing your preferred program shown on a significantly larger screen. Because of this, iPhone screen mirroring has grown increasingly popular and widespread.

There are several different methods available for mirroring the display on your iPhone to the one on your Samsung TV. Because of this, selecting the proper one might be challenging. You have, fortunately, found yourself at the correct location. The following are the options that are available to you if you want to mirror your iOS smartphone on your Samsung Smart TV.

The lightning digital AV adapter is another option for connecting an iPhone to a Samsung Tv for screen mirroring. This converter makes it simple to project content from an iPhone to an HDTV.

Problems with screen mirroring can result from a wide number of difficulties that are associated with either the mobile device or the Samsung television. You will learn in this article why the screen mirroring feature on your Samsung TV might not be functioning properly and you will also be provided with a list of quick fixes to get it functioning again.

Method 1 – Turn off and on Bluetooth

It’s possible that this will assist you in getting things back up and running with your screencast.

Because Samsung TVs are notorious for producing this error, you should attempt the connection at least twice or thrice more. Whether your smartphone still is unable to connect to the TV, you should check to see if the issue is resolved by restarting your Samsung TV.

There is a possibility that the screen mirroring issue is due to both iPhones and Samsung TVs. Therefore, one cannot conclude that the error may only occur on Samsung TVs because this is not the case. Because of this, you should absolutely give rebooting your smartphone a go at least once.

Connecting to a different device can help determine if the issue is with the TV or the mobile device by eliminating potential culprits. If the screen mirroring feature starts working on the second mobile phone, this indicates that the first mobile phone had some kind of issue. If the issue is not resolved, you should look into other potential solutions.

Method 5 – Use any third-party app

Q1- Why can’t I connect my iPhone to Samsung Smart TV?

Q2- Why is the screen mirroring not working?

The possibility exists that in order for your phone to reflect what’s happening on your TV, it has to first obtain permission to do so from the TV.

You may attempt some basic troubleshooting procedures if you are experiencing difficulties with screen mirroring on your Samsung TV. These actions include rebooting your devices, verifying your Wi-Fi connection, and turning Bluetooth on and off.

You should also check to see if there are any new software upgrades available and determine whether or not your devices are compatible with the Airplay feature.