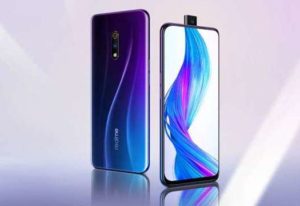 Chinese smartphone maker, Realme, announced a new smartphone in May. And according to the company, it will be the company’s first flagship smartphone in a budget range. Now, finally, Realme has launched the all-new Realme X in India and yes, as company stated earlier, the Realme X sports flagship features under the price tag of Rs. 20,000. The design of the new Realme X is a flagship for sure. The device supports a pop-up camera module to ditch the notch and in-display fingerprint scanner. The smartphone might not have the flagship processor, but overall, the smartphone stands out to be the best in the price range. If you are about to buy the device or already own one, you should check out the Realme X features and Realme X tips and tricks. The new Realme X comes with a beautiful design, with a color gradient finish on the back, which looks good, even though the material is not glass as in the newly launched Redmi K20 series. The device supports a pop-up camera and an in-display fingerprint scanner, which makes it one of the best options to choose from the segment. The available colors are Polar White and Space Blue.

Realme X sports a Super AMOLED display, which is a 6.53-inch touchscreen display with a resolution of 1080 x 2340 pixels. The display comes with an aspect ratio of 19.5:9 and a pixel density of 394ppi (pixels per inch).

The device runs on Android 9 Pie-based ColorOS 6.0. It is powered by an octa-core Qualcomm Snapdragon 710 AIE processor clocked at 2.2GHz, where two cores are clocked at 2.2GHz and six cores clocked at 1.7GHz. As we said, the processor is not flagship-grade. The device comes with 128GB of storage and two options for RAM capacity, i.e., 4GB, and 8GB.

Gaming mode boosts gaming performance for a lag-free gaming experience. And not only this, the gaming mode blocks any kind of notification and calls to avoid any interruption for hardcore gamers. To turn on this feature, go to the device settings and select the Game Space option and turn it ON.

Almost all new Realme devices come with Smart Assistant feature, and Realme X is nothing different. The Smart Assistant page can be found on the extreme left of the home screen.

The Smart Assistant feature can be used for fast access to apps, news, and contacts. However, some users find this feature useless; if you are one of them, you can turn that feature.

To turn off this feature, go to device Settings and then select the Smart Service section. In the section, turn off the Smart Assistant feature.

Smart Driving mode comes next in the list of best Realme X tips and tricks. The same feature was seen on the Realme 3 Pro device. The mode works like Samsung’s Driving mode, where the device automatically blocks the call while driving. The caller will get to know that you are riding a vehicle.

Next on the Realme X tips and tricks list is the OTG accessibility. In Realme X, you can quickly transfer movies, videos, and songs. For this, you need to turn on the OTG feature. With which you can easily connect any storage device like USB drive using the micro USB port on Realme X.

To turn on the OTG feature, dive into the device Settings first and then go to the Additional Settings. Scroll down to find the OTG option. Tap on the switch to turn it ON.

Realme X supports the feature to combine the Wi-Fi and Data Speeds. The feature is also available on other Realme devices too. The feature allows the user to get the best experience of internet surfing and downloading the content. The device automatically switches between the networks to get the interrupted data transfer. Best if you are bound to play online games on an unstable network. Realme X comes with 128 GB of inbuilt space. That’s enough to store videos, movies, and other stuff. The device helps you to manage the storage by assisting in clearing unwanted files, videos, GIFs. To do this, first, go to Settings and search for the Clean Storage option. You can also use the WhatsApp cleaner option to clear the unwanted data stored on WhatsApp. Every device in the market comes with dual apps or clone apps feature. The Clone Apps feature on Realme X comes next in the list of best Realme X tips and tricks. The feature allows users to create app clones and use dual accounts. However, Realme X doesn’t allow to clone every app; the feature is only available for social media apps.

The Realme X is powered by ColorOS 6.0, which allows users to not only choose between the swipe-up navigation gesture and virtual keys navigation but also customize the latter. This is one of the best in the list of Realme X tips and tricks. You can swap the order of the keys, and customize the shape of the button too.

To use this feature, first go to the device Settings. Select the Convenience Aid feature and then select the Navigation Keys option. To turn on this feature, first, go to the device Settings. Select the Convenience Aid feature and then tap on the button next to Wakeup Google Assistant.

The ColorOS on Realme X comes with a Smart Sidebar feature. You can access the most used apps, system tools, and settings quickly from the sidebar. Again, if you find this feature useless, you can turn this off.

To disable this feature, first, go to the device Settings. Select the Convenience Aid feature and then select Smart Sidebar. And at last, turn off the button next to Smart Sidebar.