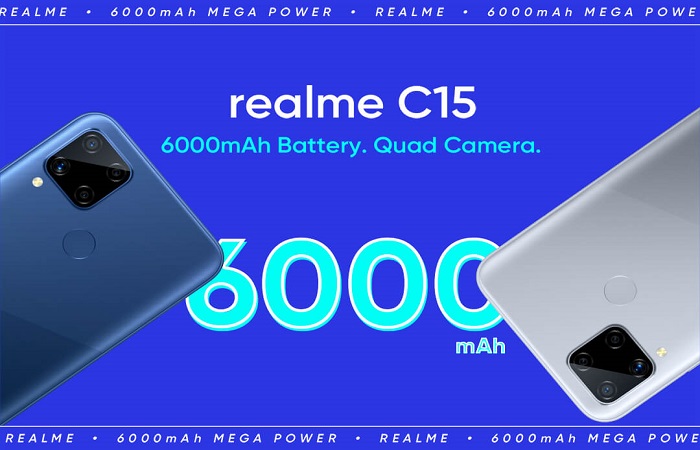 The Realme C15 is all buckled up to launch in India on August 18. The key specifications of the upcoming smartphone have been revealed. The smartphone will be sold online through the e-commerce giant Flipkart. The listing of the smartphone on Flipkart has confirmed a large chunk of the specifications including the display, camera setup, processor, and battery details.

For starters, the Realme C15 will sport a 6.5-inch mini-notch display that will most likely support HD+ resolution. The display will have a screen-to-body ratio of a whopping 88%. As per the data revealed by Flipkart, the Realme C15 will be powered by the MediaTek Helio G35 SoC. The main highlight of the smartphone is the battery capacity. Following the footsteps of Samsung’s “Mega Monster (Galaxy M31), the Realme C15 will also pack a gigantic 6,000 mAh battery that is expected to provide long-lasting battery life. The cherry on the top is that the device also supports 18W fast charging. Realme has claimed that the device will provide an astonishing 57 days of standby power. The Realme C15 launch is just around the corner. The device will go on sale via Flipkart and the official website of Realme. The Realme C15 will unveil alongside the Realme C12. Both smartphones look impressive on paper and are highly-awaited. The duo could be priced around the Rs.10,000 mark. However, this is mere speculation. Meanwhile, downloading the stock wallpapers of the Realme C15 in high definition will be a wise decision. The Realme C15 forms a worthy competitor in the budget segment of smartphones. With a 6,000 mAh battery, it is designed to impress. More information about the device will be unveiled soon.